Philip Pullman's The Golden Compass has been changing worlds for twenty years, and this stunning new slipcased hardcover edition has been created to celebrate the anniversary. Fans, collectors, and new readers alike will appreciate this beautiful book.

Newly created for this edition: a conversation between Philip Pullman and Lev Grossman, author of the Magicians trilogy, that covers the scope and tradition of fantasy literature, Pullman's influences, and the impact that the entire His Dark Materials series has had since publication. There will also be a letter from Philip Pullman to fans, marking the anniversary.

The Golden Compass tells the story of Lyra Belacqua.

Lyra is rushing to the cold, far North, where witch clans and armored bears rule. North, where the Gobblers take the children they steal--including her friend Roger. North, where her fearsome uncle Asriel is trying to build a bridge to a parallel world.

Can one small girl make a difference in such great and terrible endeavors? This is Lyra: a savage, a schemer, a liar, and as fierce and true a champion as Roger or Asriel could want.

But what Lyra doesn't know is that to help one of them will be to betray the other. . . . 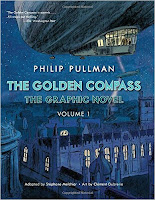 The world of Philip Pullman’s internationally bestselling His Dark Materials saga is brought to visual life in book 1 of a three-volume graphic adaptation of The Golden Compass.

Lyra Belacqua is content to run wild among the scholars of Jordan College, with her dæmon familiar always by her side. But the arrival of her fearsome uncle, Lord Asriel, draws her to the heart of a terrible struggle—a struggle born of Gobblers and stolen children, and a mysterious substance known as Dust. As she hurtles toward danger in the cold far North, Lyra never suspects the shocking truth: she alone is destined to win—or to lose—this more-than-mortal battle.

The stunning full-color art offers both new and returning readers a chance to experience the story of Lyra, an ordinary girl with an extraordinary role to play in the fates of multiple worlds, in an entirely new way.

Fresh out of Cambridge University, the young Mycroft Holmes is already making a name for himself in government, working for the Secretary of State for War. Yet this most British of civil servants has strong ties to the faraway island of Trinidad, the birthplace of his best friend, Cyrus Douglas, a man of African descent, and where his fiancée Georgiana Sutton was raised.

Mycroft’s comfortable existence is overturned when Douglas receives troubling reports from home. There are rumors of mysterious disappearances, strange footprints in the sand, and spirits enticing children to their deaths, their bodies found drained of blood. Upon hearing the news, Georgiana abruptly departs for Trinidad. Near panic, Mycroft convinces Douglas that they should follow her, drawing the two men into a web of dark secrets that grows more treacherous with each step they take...

Written by NBA superstar Kareem Abdul- Jabbar and screenwriter Anna Waterhouse, Mycroft Holmes reveals the untold story of Sherlock’s older brother. This harrowing adventure changed his life, and set the stage for the man Mycroft would become: founder of the famous Diogenes Club and the hidden power behind the British government.

From New York Times bestselling author Jonathan Maberry, the first in a thrilling series of novels based on Deadlands, a hugely successful role-playing game (RPG) set in the Weird, Weird West.

Welcome to the Deadlands, where steely-eyed gunfighters rub shoulders with mad scientists and dark, unnatural forces. Where the Great Quake of 1868 has shattered California into a labyrinth of sea-flooded caverns . . . and a mysterious substance called "ghost rock" fuels exotic steampunk inventions as well as plenty of bloodshed and flying bullets.

In Ghostwalkers, a gun-for-hire, literally haunted by his bloody past, comes to the struggling town of Paradise Falls, where he becomes embroiled in a deadly conflict between the besieged community and a diabolically brilliant alchemist who is building terrible new weapons of mass destruction . . . and an army of the living dead!

Deadlands is one of the most popular RPGs in history, with over a million Deadlands gaming books sold.

Carter Sloan is a trained assassin—the best there is, pulled out of cryogenic sleep whenever an assignment demands his skills. So when he’s kept in the deep freeze for 258 years, he’s seriously pissed off.

Yet his government needs him, to hunt down the enemy known as the Daughter of the Brass Dragon. The future of the galaxy-spanning Reich depends on it, so Sloan is off—screwing, swearing, and shooting his way across interstellar space.

lt’s action, adventure, and disgusting gelatinous aliens as only Victor Gischler can create them.

The Collectors: A His Dark Materials Story by Philip Pullman

A brand-new e-short, set in the world of Philip Pullman’s beloved and bestselling The Golden Compass

In this darkly delicious sliver of a tale, Philip Pullman offers a glimpse of the enigmatic girl who will become the sinister Mrs. Coulter.

On a cold winter's night, two art collectors are settled before a fire in the Senior Common Room of a college in Oxford, discussing the unusual pieces one has recently added to his collection. What the two men don't know is that the portrait of a striking young woman and the bronze sculpture of a fearsome monkey are connected in mysterious ways. How could they imagine that they are about to be caught in the cross-fire of a story which has traveled time . . . and worlds.

Published in 50 countries with over 22 million copies sold, The Golden Compass, The Subtle Knife, and The Amber Spyglass are renowned for their engrossing storytelling and epic scope. This new short tale will delight the many fans eager for any new glimpse into the world of His Dark Materials.