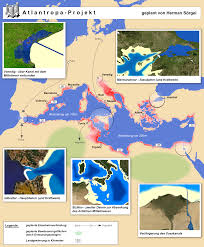 Last week, Ricarda Vidal published an article on Real Clear World about German architect Herman Sörgel's early 20th century plan to build dam across the Strait of Gibraltar containing a massive hydroelectric power plant. Sörgel argued that this dam would provide free energy to the nations of Europe and open up new land due to the retreating Mediterranean Sea, which would be partially drained. There was also a plan to dam the Congo River, which would refill Mega-Chad basin around Lake Chad, thus allowing the Sahara to be irrigated and open Africa to further colonization by Europeans. This new mega-continent would be called "Atlantropa".

The hope was that the massive amounts of time and resources needed to accomplish this goal would discourage nations from war and further solve the energy and unemployment problems plaguing Europe in the 1920s and 30s. Sörgel's grand idea of peace and prosperity, however, never came to fruition. In his article, Vidal used the Atlantropa plan to criticize Europe for failing again to cooperate to solve their communal problems in light of the ongoing refugee crisis.

The problem with Atlantropa is that despite its utopian ideals, it sounds more like a plan Lex Luthor would come up with to make a fortune through real estate. There are also other reasons for why Atlantropa never worked out in spite of European cooperation. For one thing the partial draining of the Mediterranean would have ruined the economies of coastal cities in the region. The Suez Canal would also need to be extended and while Sörgel planned for that in his vision, worldwide shipping would be disrupted as people waited for the extension to be completed. On top of that, any new land created from the draining sea would just be salt flats that would not be able to support agriculture.

All of that aside, doing my own preliminary research on Atlantropa made the whole idea seem less utopian and more racist. Sörgel had a very Eurocentric view of Africa, seeing it as a land that was only there to be exploited by Europeans. What would have happened to the peoples and cultures of Africa after they were displaced by climate change and European colonization didn't seem to concern Sörgel or his supporters. There also was a level of paranoia in the plan, which argued Europeans needed to resources of both the Middle East and Africa to protect themselves not only from America, but also the nations of Asia. In fact, if Wikipedia is to be believed, Hitler himself said the idea was in line with Nazi ideology.

Yikes. Now to be fair to Vidal, knocking an idea down from the 1920s and 30s just because the Nazis thought it was a good idea perhaps isn't a valid argument. For example, the world certainly benefited from Germany's research into rockets and were bizarrely pro-animal rights. That being said, when you begin to imagine the sheer number of people who could have died or have their lives ruined in one way or another if the Europeans went ahead with Atlantropa, reminding them of it is not a good idea if you are trying to get them too cooperate.

So what does Atlantropa have to do with alternate history? Well several books have referenced a plan to dam the Mediterranean, even if the project wasn't the focus of the story. The Man in the High Castle by Philip K. Dick and the Domination series by SM Stirling are two good examples. Perhaps its not ironic that the two groups who went through with it were the aforementioned Nazis and the Draka, a culture where readers often root for the Nazis to beat them. Harry Turtledove also tackled Atlantopa in his novella "Down in the Bottomlands", although in this story the Atlantic Ocean did not reflood the Mediterranean Sea, creating one of the harshest deserts on Earth, instead of it being a man made phenomenon.

Certain utopian ideals continue to have subscribers because on their face they make a certain amount of sense. Atlantropa, however, is not one of those utopian ideas. Its pointless, racist and, since the rise of nuclear energy, obsolete. Using it as a means to remind Europe of what happened last time when they didn't cooperate, undercuts the entire argument. I personally find the Franco-British Union of WWII or the original goals of the League of Nations to be a much better argument. Let Atlantropa, on the other hand, remain a footnote in an alternate history.