Happy Monday everyone. I am not sure how your weekend went, but mine involved watching the map I covered for the last Map Monday go viral for all the wrong reasons. People were sharing it across the Internet as a map of North America before European colonization and using it to criticize the American educational system. I completely agree with them that the way America teaches history is sorely lacking because none of these do-gooders realized they were sharing a map of a North America that was never colonized by Europeans. In factthe number of people who posted this map on their pages who should have known better is astounding as well. This incident shows us how much of an uphill battle it is to promote alternate history to the masses.

I want to give a big thank you to Sean Sherman for becoming my first patron! If you guys haven't already, go check out his personal website and his alternate history blog, Other Times. He hasn't posted there in a while, but a lot of good scenarios can still be found there. Remember, you can also support my alternate history projects by either becoming one of patrons on Patreon or purchasing books from Amazon by clicking on the banner to the right. 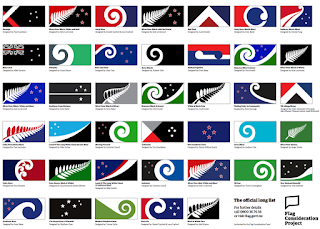 Changing the flags for countries is a popular pastime among alternate historians, but what happens when a nation wishes to change their flag in this timeline? Well in the case of New Zealand they are looking for a new flag that will distance themselves from their colonial past, while better differentiating themselves from Australia (the only major difference now between the two flags is the color of the stars).

What you see above are the finalists, although they weren't the only designs submitted to the campaign to change the flag. Which of the flags above do you think is the best fit for New Zealand? Let us know in the comments above. 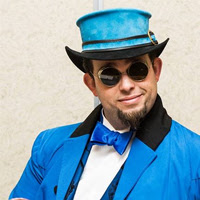 The alternate historian of the week honor goes out to Enrique Velazquez, also know as DJ Doctor Q and Dr. Quincy Erasmus Quartermain. For those who don't know. he is the director of the Dragon Con Alternate History Track and he has been working hard to prepare for the convention next month. Just look at this lineup of guests. You can learn more about the track at the interview Doctor Q gave the Steampunk Chronicle and his guest spot on the Dragon Con Media Relations Podcast. Also you can check out the interview I did with him in 2012.

Honorable mention this week goes to author John Barnes for his critical essay on alternate history.

TV Show of the Week: Amazon's The Man in the High Castle

I have mixed feelings about this honor, because there really is only one alternate history show currently on the air. Still there was a lot of news regarding Amazon's adaptation of The Man in the High Castle last week so I really had to talk about it.

The big news is that they cast Brennan Brown as Robert Childan. According to the Wikipedia article on the book, Childan owns American Artistic Handcrafts, an Americana antiques business that sells authentic and counterfeit items, mostly to the Japanese occupiers. Childan has adopted the manners, cadences of speech in English, aesthetics, and ways of thinking of the Japanese occupiers, but still admires the Nazis. Despite his deference to the Japanese, he is privately contemptuous of them, retaining his pre-war racist beliefs that non-whites are inferior to whites (despite the fact that he lives in the Japanese occupied West Coast). I'm curious to see how close the character in the adaptation will resemble the character from the book.

If you want more info on the The Man in the High Castle television series, check out Den of Geek's interview with executive producers Frank Spotnitz, Isa Dick-Hackett, and David W. Zucker; and read my review of the pilot on Amazing Stories.

Video of the Week: What if the Crusades Never Happened? by Alternate History Hub

The Crusades are an intriguing time period of European history. This was perhaps the first instance of European imperialism and although the Crusaders were eventually driven from the Holy Land, it left Europe with a taste for the outside world that would come to shape all of history thereafter.

But what if the Crusades never happened? Cody Franklin of the Alternate History Hub answered that question in one of his recent videos:
I find his idea of a more violent and yet more tolerant Europe to be quite original and I also enjoyed the artwork he included in this video as well. More importantly, I am glad to see that we are getting more videos from the Hub when months before we could go weeks before seeing one.