Map Monday: North America in A Canticle for Leibowitz, circa the mid-26th century by Tsar of New Zealand

Today's Map Monday doesn't feature an alternate history, but it does feature a map from a world that many alternate historians have embraced. I am talking about A Canticle for Leibowitz by Walter M. Miller Jr. I read this book years ago and I enjoyed it immensely, but I have never reviewed it. So just a quick review: I highly recommend you go and read A Canticle for Leibowitz. It is set in the former United States in three different time periods following the aftermath of a nuclear war. It has great world-building, strong Catholic themes (without being overly preachy) and a warning about the dangers if history repeats itself.

Enough about the book, lets take a look at the map. This one is done by Tsar of New Zealand, who has been featured on Map Monday before for his maps based on published works. This time he has covered North America in A Canticle for Leibowitz, circa the mid-26th century (~600 years since the Flame Deluge): 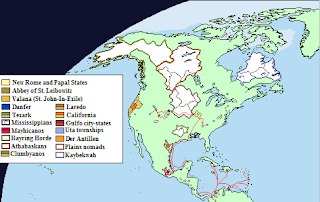 The time period sets the map at the beginning of A Canticle for Leibowitz. Admittedly the map is very simple and has few details, but it is still cool to see someone use the common AlternateHistory.com map template for one of my favorite post apocalyptic books. Hopefully we will see more maps from Tsar of New Zealand set during A Canticle for Leibowitz timeline, especially ones outside North America, which Miller wrote so little about.

Honorable mentions this week goes out to Brilliant Maps for sharing the "Territorial Waters & Exclusive Economic Zones (EEZ) Of The World" map. If you want to submit a map for the next Map Monday, email me at ahwupdate at gmail dot com with your map attached and a brief description in the body of the email.