I really want to make an important announcement today, but I am not sure if I am allowed too yet. So you guys are stuck with this teaser for now. Nevertheless, I am very excited and can't wait to share the good news.

I hope everyone had a fun Father's Day weekend. Due to all the fun I had with my Dad and family, I didn't have as much time as usual to write for The Update. So my apologies for any days where I have nothing to post. 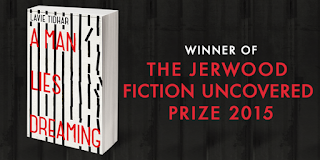 Deep in the heart of history's most infamous concentration camp, a man lies dreaming. His name is Shomer, and before the war he was a pulp fiction author. Now, to escape the brutal reality of life in Auschwitz, Shomer spends his nights imagining another world - a world where a disgraced former dictator now known only as Wolf ekes out a miserable existence as a low-rent PI in London's grimiest streets. An extraordinary story of revenge and redemption, A Man Lies Dreaming is the unforgettable testament to the power of imagination.

As for the Jerwood Fiction Uncovered Prize, it is an annual prize fund of £40,000 divided between eight British authors. Lavie's novel was the alternate historian represented among this group and our hearty congratulations go out to him.

What you may have missed... 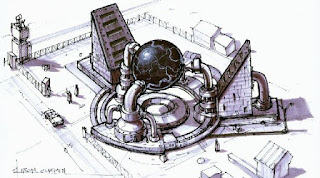 Three articles shined across social media last week. First up, Mark Johnson wrote a long article on the "alternate history aesthetics" in the Command & Conquer: Red Alert series. Its a cool article featuring a combination of concept art and in-game footage. Fans of perhaps the most well-known alternate history RTS should definitely check it out.

Next up, ever wondered what the plan is in case an asteroid is ever on a collision course with the Earth (you know, besides panicking and looting)? Well now we know thanks to David S. F. Portree who shared with us how a group of MIT students tried to prevent exactly that. Thanks also to David for not treating me like a complete idiot when I originally said "meteor".

Finally, if you ever worried about what to do in case you accidentally traveled back in time or stepped into a parallel timeline, here is some good advice from Mallory Ortberg of The Toast.

Didn't I say I would be doing a video of the week? For our inaugural video of the week we have Part Two of How the Avengers: Age of Ultron should have ended:
I am surprised it took me this long to start sharing videos from How It Should Have Ended (HISHE). Granted its alternate fictional history, but we have all wondered at some point about what if our favorite characters made different choices.

Email ThisBlogThis!Share to TwitterShare to FacebookShare to Pinterest
Labels: A Man Lies Dreaming, Avengers: Age of Ultron, How It Should Have Ended, Lavie Tidhar, Matt Mitrovich, Red Alert, Weekly Update