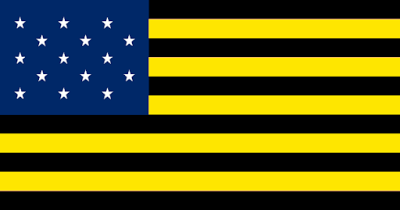 Liberia was established in 1822 by the American Colonization Society. It gained independence in 1847. Liberia was home to a number for freed slaves from America.

The Republic of Maryland was established near Liberia by the Maryland State Colonization Society. Draconian laws to limit the liberty of freed slaves in Maryland. These laws were used to coerce free blacks into moving to the colony or face the possibility re-enslavement. In 1854, the Republic of Maryland declared its independence and decided not to join Liberia. The Maryland State Colonization Society wanted to try to maintain its monopoly on trade.

In 1855, both Maryland and Liberia were attacked by an alliance of various local tribes. Both small nations coordinated their defenses and eventually merged into one state in 1859. At the end of the war eleven counties formed the new, larger Liberia. The colors of the Republic of Maryland's flag were chosen for the new flag of the nation. One of the reasons of the change in flag was to stop using the colors of the United States in an attempt for form their own identity. Eleven stripes on the flag represent the signatories of the Liberian Declaration of Independence. The American tradition of adding stars to a blue field as new territories were admitted was adopted.

In 1944, the collapse of the British government during the Second World War gave Liberia a chance to add three more stars (to 18) to its canton with the admission of Sierra Leone into the nation. While many of Britain's former colonies were turned into United Nations mandates after the Axis was finally defeated in 1947, the union of Sierra Leone to Liberia was allowed to stand.