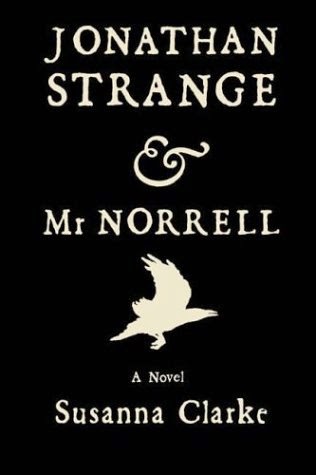 With BBC's upcoming adaptation of Susanna Clarke's Jonathan Strange & Mr Norrell, I decided to prepare for the mini-series by actually reading the book it was based on. Even without the adaptation, I probably still would have gotten around to Clarke's debut novel. It is a critically acclaimed work of historical fantasy that has delighted fans from almost every corner of speculative fiction and I can now count myself as one of the many who praise this book.

Jonathan Strange & Mr Norrrell tells the story of magic's return to England. In this world it is a accepted fact that magic is real, but people have been unable to practice it for centuries. That all changes when the reclusive gentleman, Mr Norrell, brings all the statues in the cathedral of York to life. After this feat of magic he travels to London to aide the government in their war against Napoleon and he gains the trust of the ministers when he brings one of their number's wife back from the dead. As interest in magic increases, a young gentleman named Jonathan Strange decides to pursue a career in magic and shows such a natural talent for it that even the friendless Mr Norrell agrees to take him on as a pupil. The two magicians, however, quarrel and Strange sets off on his own independent research into dangerous fields of magic that could bring about the doom of many.

Jonathan Strange & Mr Norrell was an intriguing fantasy story that also had a realistic portrayal of magic. The characters were complex and even the most wretched of them had certain aspects that you could admire. There are plenty of historical cameos that alternate historians can enjoy and reading about Strange's service in Wellington's army during the Peninsular War and at the Battle of Waterloo made me want to pick up some military fantasy to see how Clarke's depiction of war magic compares to more recent examples. The book has an old fashioned writing style, but fans of Dickens or Austen will appreciate Clarke's obvious interest in English literature.

The book, however, can be dull at times. The paperback copy I read clocked in at 1006 pages, which is an unusual length for a speculative fiction book. Much of the story actually focuses on the mundane aspects of early 19th century life, with plenty of criticism directed against the English class system. Casual readers who were looking for an action-packed fantasy epic are going to be severely disappointed. Even I thought the last third of the book could do with some culling, but that is really the only major issue I had with the book. The final conclusion was worth all the build up, even if in retrospect we could have done without some of it.

I am hesitant, however, to classify Jonathan Strange & Mr Norrell as an alternate history. In spite of the existence of magic, history mostly parallels our timeline. The real difference to history is presented mostly through the footnotes of the book. During the Middle Ages a magician known as the "Raven King" conquered Northern England and ruled it for 300 years before disappearing. There is an amusing comment by one character who says many countries have myths about a king who will return, but England is the only country where it is part of the constitution (should the Raven King ever return Northern England will revert back to his control). Nevertheless, I can see why it is not listed in Uchronia and "historical fantasy" is probably a better label than alternate history.

Despite its length and lack of alternate history content, I can still recommend Jonathan Strange and Mr Norrell. It is an engaging story with surprising depth, just don't let its size scare you. It is certainly worth your time.