Alt Hist returns with the seventh issue of the popular magazine of historical fiction and alternate history. This is the biggest issue of Alt Hist so far and this time we have seven wonderful short stories for you—including two parts of the popular Battalion 202 series and stories from Alt Hist favourites Priya Sharma and Andrew Knighton. If you like historical fiction, then you are sure to love this issue of Alt Hist. Alt Hist Issue 7 features the following stories: “The Vivisectionist's Daughter” by Jason Kahn “Cold Flesh” by Andrew Knighton “The Independence Day” by Pavel Nikiforovitch “Heff in Dearborn” by Michael Fertik “Battalion 202: The Sheep and the Goats” by Jonathan Doering “Set Britain Ablaze” by Jonathan Doering “The Red Vortex” by Priya Sharma

Kenya, 1947. A hunting expedition led by American writer John Remington makes a startling encounter, and then vanishes without a trace. Shortly afterwards, Katherine Austin, agent of the British Secret Intelligence Service, arrives in Mombasa. Her mission: investigate a series of mysterious sightings and incidents, of which the disappearance of the Remington party could be the latest. Undercover as a teacher, courted by colleagues who may be working for competing secret services, she’s about to enter a whole new reality…

A mysterious woman named Magna Spadarossa searches the many kingdoms of her Steampunk world to find her missing sister, Sonja... but she's pursued by strange and dastardly villains. Thankfully, each glamorous airship, clockwork city, and primordial jungle hosts a brave hero to aid in her quest! Bill Willingham, the bestselling author of DC/Vertigo's Fables, reimagines the most iconic characters in the Dynamite stable in a self-contained Steampunk universe! Featuring Red Sonja, Vampirella, Green Hornet, Kato, Flash Gordon, The Phantom, Silver Star, Captain Victory, The Six Million Dollar Man, and Zorro... as you've never seen them before!

Lord Scott Oken, a prince of Albion, and Professor-Prince Mikel Mabruke live in a world where the sun never set on the Egyptian Empire. In the year 1877 of Our Lord Julius Caesar, Pharaoh Djoser-George governs a sprawling realm that spans Europe, Africa, and much of Asia. When the European terrorist Otto von Bismarck touches off an international conspiracy, Scott and Mik are charged with exposing the plot against the Empire.

Their adventure takes them from the sands of Memphis to a lush New World, home of the Incan Tawantinsuyu, a rival empire across the glittering Atlantic Ocean. Encompassing Quetzal airships, operas, blood sacrifice and high diplomacy, Ramona Wheeler's Three Princes is a richly imagined, cinematic vision of a modern Egyptian Empire.

The Untime by Hugh Ashton

The Untime; a mysterious and dangerous state, beyond our powers of conception. In the Paris of the 1890s, Jules Gauthier, a young journalist, enters the Untime with its discoverer, Professor Lamartine. What they find there could be the end of our Universe as we know it. When Lamartine disappears mysteriously, Gauthier, together with Agathe, Lamartine's daughter, and Lamartine's rival, Professor Schneider, must brave the terrors of the Untime, journeying through time and space.

King of the Cracksmen by Dennis O'Flaherty

The year is 1877. Automatons and steam-powered dirigible gunships have transformed the nation in the aftermath of the Civil War. Everything on the other side of the Mississippi has been claimed for Russia. Lincoln is still president, having never been assassinated, but the former secretary of war Edwin Stanton is now the head of the Department of Public Safety, ruling with an iron fist as head of the country’s military. 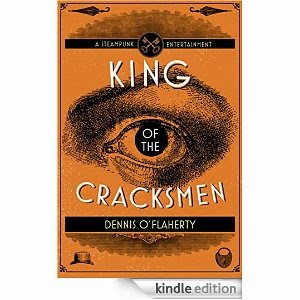 Liam McCool is a bad man, one of the best Irish cracksmen there is when it comes to robbery, cracking safes, and other sundry actives—until he was caught red-handed by Stanton. Those in the South who don’t fit into Stanton’s plans for the Reconstruction, and Stanton realizes Liam McCool is more useful doing his dirty work than sitting in a jail cell. But when his sweetheart, Maggie, turns up murdered, Liam McCool realizes he’ll do anything, even if it means getting way over his head with bloodthirsty Russians, to solve the crime.

The King of the Cracksmen is an explosive, action-packed look at a Victorian empire that never was, part To Catch a Thief, part Little Big Man. It’s steampunk like you’ve never seen it before, a murder mystery in a foreign world where no one is who they seem to be and danger lurks around every corner.