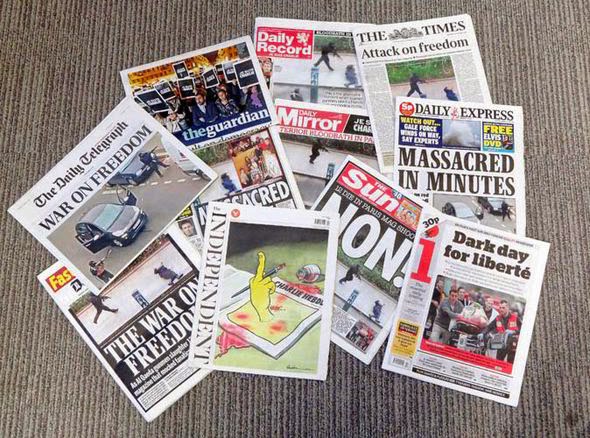 I, like many, was horrified to learn of the terrorist attack on the Charlie Hebdo offices in Paris, France a few days ago. Yet I felt no desire, at first, to express my feelings on the Internet, especially on The Update. As many of you may know I am a stickler for staying "on-topic" and my personal opinions on a recent tragedy is rarely on-topic for an alternate history blog. Yet something about this event and all the commentary I have heard and read nagged at me enough that I felt compelled to say something.

One of the likeliest motives behind the attack is Charlie Hebdo's mockery of Islamic leaders like the Prophet Muhammad. Its true that the magazine has been the center of a lot of controversy throughout its history, especially with its criticisms of religion, where it has lampooned Muslims, Christians and Jews. While many may not condone Charlie Hebdo's views, people in the western world hold the ideal of free speech as one of the pillars of modern civilization. Thus we tolerate offensive speech to protect the right of expression for all.

Alternate historians, by creating new timelines where we turn history upside down, practice free speech on a daily basis. History, however, can be a very serious subject for many people. An individual's history can be as sacred as the god they believe in, even if it is based on propaganda, nationalism, misconceptions or even outright lies. People don't like to hear their history dissected, judged or revised. They can become dismissive, defensive, argumentative and sometimes even violent. Perhaps because alternate history is such an "esoteric" subject, we tend to fly under the radar, but that may not always be the case.

One of the very first alternate histories stories I ever read was Harry Turtledove's "Departures",  which is set in Turtledove Agent of Byzantium series. It features a timeline where the man who would become the Prophet converted to Christianity instead. After the attack on Charlie Hebdo I began to reevaluate that story. Would an Islamic fundamentalist who accepts violence as a means to an end find this story offensive? What about other published books, short stories and web originals where Islam doesn't exist or is marginablized? Could Turtledove or anyone who read them be in danger? Its easy to laugh that question off as nonsense, but after what happened to Charlie Hebdo not many people are laughing anymore.

People are scared. There are people who are already blaming Charlie Hebdo for bringing this on themselves and some publishers are censoring their writers and cartoonists for showing solidarity with the victims of the massacre. Alternate historians can't sit quietly while free speech is under attack. Free speech is paramount to the work we do and to lose it because of political correctness or threats of violence will mean the end of a genre that dates back to the BC era.

So what can we do? Stand together. All of us must defend the right of free expression, whether its through our speech, the words we write or the pictures we draw. My prayers are with those who we lost and their loved ones. May their deaths lead all of us to become better humans in the future.