Who said there would be no New Releases this week? Oops!

Brass Sun: The Wheel of Worlds by Ian Edington and I. N. J. Culbard

Wren's father has revealed to her the secret of their world, that it is only one of many in a clockwork solar system; but it is dying and to save her home, she must first escape it.

The Orrery is a fully functional, life-size clockwork solar system, a clutch of planets orbiting a vast Brass Sun via immense metal spars.

But the once-unified collection of worlds has regressed into eccentric fiefdoms, and ice is encroaching on the outer planets as the sun is dying. Wren and Eptimus must find the key to restart the sun, but first must escape the world known as The Keep....

This is a wholly original new SF-clockpunk series from the bestselling artist of New Deadwardians and the hit writer of Scarlet Traces and Hinterkind.

The powerful House Un-American Activities Committee hunted communists both at home and abroad.  In the late 1940s, the vampire Count Saint-Germain is caught up in intrigue surrounding a group of Americans who have fled to postwar Paris. Some speak out against HUAC and battle the authorities.

Saint-Germain swears to do his best to protect his friends, but even his skills may not be able to stand against agents of the OSS and the brand-new CIA.  And he has an unexpected weakness: his lover, Charis, who has returned to Paris under mysterious circumstances.

A girl with a clockwork heart must make every second count.

When Penny Farthing nearly dies, brilliant surgeon Calvin Warwick manages to implant a brass “Ticker” in her chest, transforming her into the first of the Augmented. But soon it’s discovered that Warwick killed dozens of people as he strove to perfect another improved Ticker for Penny, and he’s put on trial for mass murder.

On the last day of Warwick’s trial, the Farthings’ factory is bombed, Penny’s parents disappear, and Penny and her brother, Nic, receive a ransom note demanding all of their Augmentation research if they want to see their parents again. Is someone trying to destroy the Farthings...or is the motive more sinister?

Desperate to reunite their family and rescue their research, Penny and her brother recruit fiery baker Violet Nesselrode, gentleman-about-town Sebastian Stirling, and Marcus Kingsley, a young army general who has his own reasons for wanting to lift the veil between this world and the next. Wagers are placed, friends are lost, romance stages an ambush, and time is running out for the girl with the clockwork heart.

On Her Majesty's Behalf by Joseph Nassise

The outrageously inventive follow-up to By the Blood of Heroes from New York Times and USA Today bestseller Joseph Nassise!

At the close of 1917, the Germans introduced a new type of gas, T-Leiche--"corpse gas"--a revolutionary weapon that changed the war. Instead of killing the living, T-Leiche resurrected the bodies of the dead.

For those who survived the killing fields of France, the danger has only just begun. Veteran Michael "Madman" Burke and his company have just been assigned a daring new mission by the president himself: rescue the members of the British royal family.  But Manfred von Richthofen, the undead Red Baron and newly self-appointed leader of Germany, is also determined to find the family.

In the devastated, zombie-infested city of London, Burke and his men will face off in an unholy battle with their most formidable opponent yet: a team of infected super soldiers - shredders - who have greater speed and strength than their shambler predecessors.  If they don't succeed, all of Britain will fall into undead enemy hands.

Sierra and Max arrive in 2062, and find the world has somewhat changed. Joe Biden was President from 2009-2017, and train travel is much more prominent. Was this due to the scrolls that she rescued from the Library of Alexandria? Heron's Chronica, which describes how to building a time travel device and was one of the texts Sierra saved from burning, has not yet been published, and Sierra soon realizes that Heron is doing everything in his lethal power to prevent that from happening. Her attempt to safeguard the Chronica, which she left in William Henry Appleton's keeping, takes her to the end of the 1890s, where she interacts with John Jacob Astor IV, Nikola Tesla, Thomas Edison, J. P. Morgan, film pioneers William Dickson and Edwin Porter, and other denizens of The Gilded Age.

A Clockwork Victim by Quinn Langston 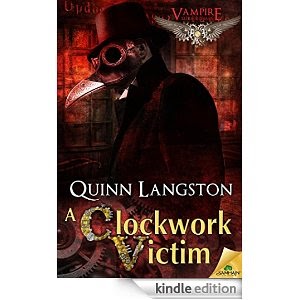 Beware when a vampire loses control!

In 1850s London, most mortals are not aware that vampires walk amongst them. Lord Sebastian Hawthorne, himself a vampire, intends to keep it that way. Unfortunately, when someone begins killing off well-known citizens—in gruesome ways—all signs point to a newborn vampire unable to control the bloodlust.

Marcus Dwyer, a fellow vampire, admits to turning a woman for companionship, and now she’s out of control. He needs Sebastian’s help. Together, Marcus, Sebastian and Theo, Sebastian’s human friend, set out to catch the rogue killer before she exposes their secret.

Will they find her in time? Or will the police capture her first, and will their discovery lay waste to the vampires’ immortal world? 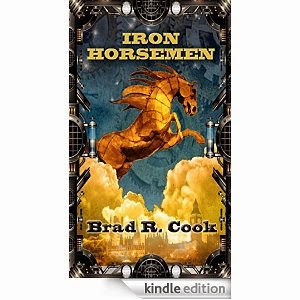 Alexander Armitage doesn't fit in at Eton College. Not only is he an American, his father, a new teacher at the college, is obsessed with ancient languages and the dusty old books he makes Alexander spend his time studying instead of trying to make friends. When his father is kidnapped, Alexander gladly leaves school behind and finds himself partnered with a baron's daughter, her little bronze dragon, and an eclectic crew of Sky Raiders in a quest to find him. When their search leads them to Malta, they discover a secret society intent on unleashing the ancient Iron Horsemen and usurping the reins of power in London.

In a steam-powered Victorian world where pirates prowl the sky and secret societies determine the future like a game of chess, Alexander must confront the harsh legacy of the divided country he left behind, a new aristocratic world that rejects him, and the overwhelming pressure of being offered to become a Horseman himself.

Vietnam and Other Alien Worlds by Joe Haldeman 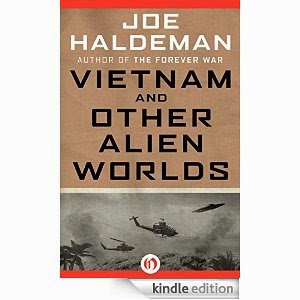 Nebula and Hugo Award–winning author Joe Haldeman burst onto the literary scene with the hugely popular novel The Forever War, but his career also took off on the strength of his short fiction. This brilliant collection brings together examples of his science fiction as well as his writing on Vietnam—and reveals the inexorable connections between the two.

The works included in Vietnam and Other Alien Worlds are united by its title essay, in which Haldeman explains how his past informs his envisioned futures. One of these futures is a grouping of four stories from the Confederación universe, which includes his novels All My Sins Remembered and There Is No Darkness. An anthropological expedition goes awry as a research team’s subjects become murderous, and trade negotiations fall apart, comically lost in translation. The collection closes with one of Haldeman’s most affective works about Vietnam—the moving narrative poem “DX.”

Vietnam and Other Alien Worlds proves to be an anthology as versatile and multifaceted as the author who wrote it.

This ebook features an illustrated biography of Joe Haldeman including rare images from the author’s personal collection.