This is now the third time I have featured a map by PlatoonSgt (see Map of North America, 1750 and The World Cromwell Made on December 25, 1955) on Map Monday. Before I go into why I like his maps, lets take a look at today's featured map: 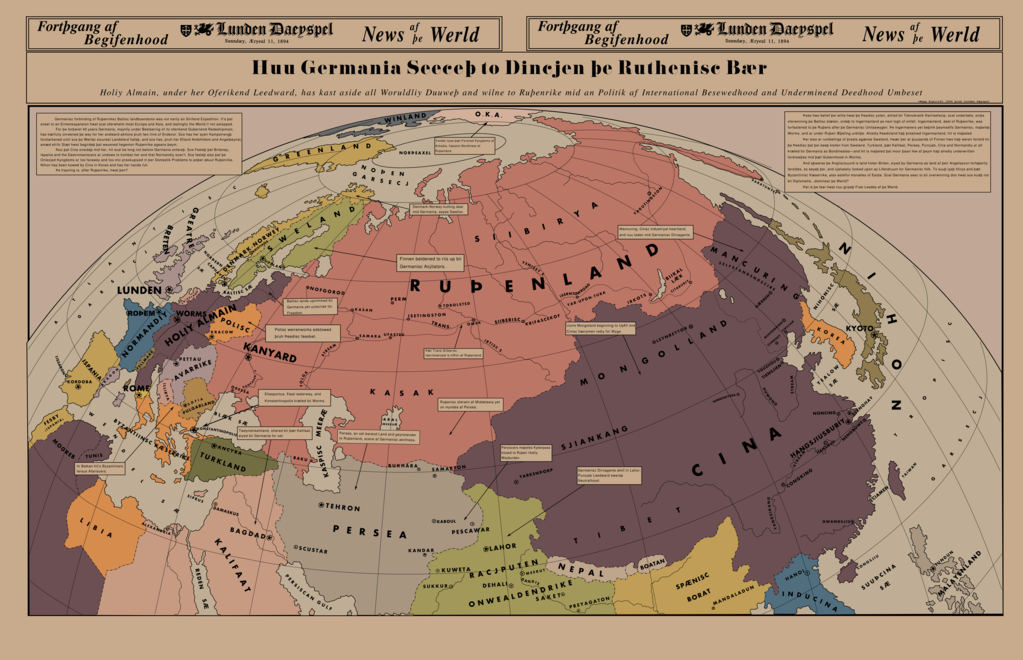 This is called "The Grand War". You can find a full description of this scenario here, but the point of divergence involves China being ruled by a Muslim dynasty. Butterflies flap their wings and, among other changes, we find a world where the Norman invasion of Britain failed, the Holy Roman Empire is more centralized and the Kievan Rus are still the center of Russian culture. You don't also see Islamic Chinas often in alternate history, so this map certainly gets some points for originality.

Its the style, however, that makes me a true fan of PlantoonSgt's work. He doesn't use the common templates you see everyday on AlternateHistory.com. He continually presents different ways of looking at maps, that I respect. I also thought the Anglo-Saxon language was a nice touch (and there is an English language version). I look forward to the fourth time I feature one of PlatoonSgt's maps on Map Monday and if you want a better look at his work, check out this thread.

Honorable mentions this week include "The Dominion of New England" by False Dmitri and, just to prove I look at maps outside of AlternateHistory.com, "Europe Post Copenhagen" by Arbolianus of the AltHistory Wiki. If you want to submit a map for the next Map Monday, email me at ahwupdate at gmail dot com with your map attached and a brief description in the body of the email.