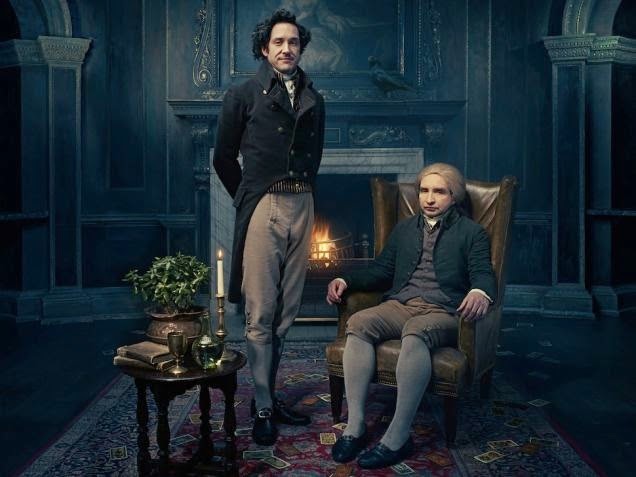 I was so quick to talk about BBC's adaptation of SS-GB that I completely missed the news yesterday regarding another BBC alternate history project. Above is our first look at the titular characters of the the BBC adaptation of Susanna Clarke's Jonathan Strange & Mr. Norrell. Set in England during the Napoleonic Wars, the novel tells the story of two rivals magicians in an alternate history where magic is widely acknowledged, but rarely practiced. Eddie Marsan will play Mr. Norrell (right) and Bertie Carvel will play Jonathan Strange (left).

The Jonathan Strange & Mr. Norrell will be a seven-part series that will premier sometime next year. More importantly, this news has got me asking the question: are we living at the start of the golden age of alternate history? Has mainstream media finally realized that there is value to these stories and it is ready to share them with a wider audience? Or conversely, has the splintering of media meant that producers are scrambling for content and throwing anything against the wall to see what sticks?

Either way, alternate history may actually be poised to make a major break in the mainstream in 2015, what with this, SS-GB, Amazon's The Man in the High Castle and Hulu's 11/22/63 coming out soon. I am very excited by these developments, but what do you guys think? Let us know in the comments.