The Change: Tales of Downfall and Rebirth will be published in June 2015 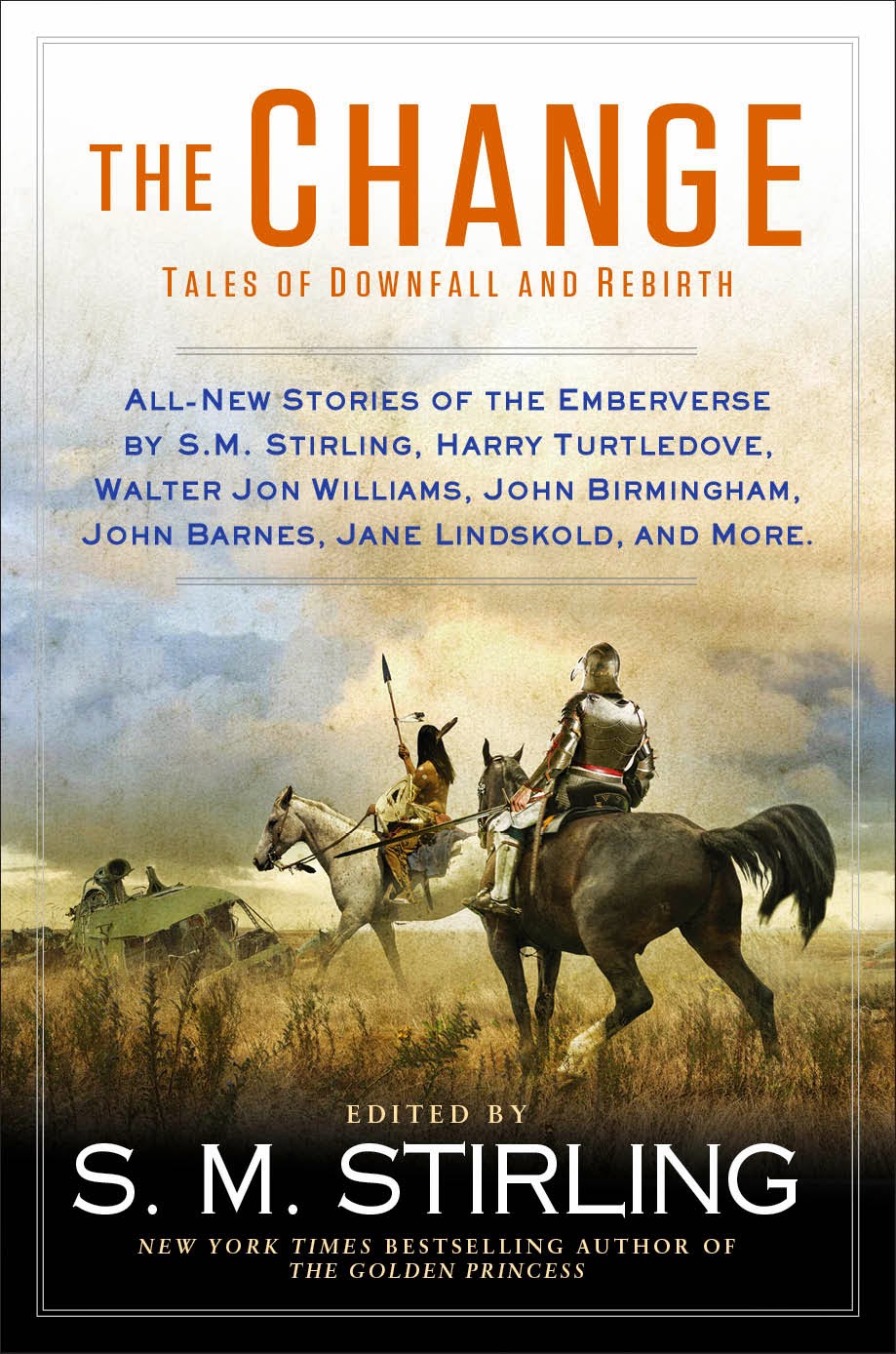 If you followed me on social media (and shame on you if you don't) you would have seen the cover for SM Stirling's new anthology of Emberverse (or Change Series depending on your personal preference) short fiction coming out in June 2015 and will feature many well-known science fiction and fantasy authors. Titled The Change: Tales of Downfall and Rebirth, here is the overview from Penguin:

“[A] vivid portrait of a world gone insane,” S. M. Stirling’s New York Times bestselling Novels of the Change have depicted a vivid, utterly persuasive, and absorbingly unpredictable postapocalyptic wasteland in which all modern technology has been left in ashes, forcing humankind to rebuild an unknowable new world in the wake of unimaginable—and deliberate—chaos.

Now, in this startling new anthology, S. M. Stirling invites the most fertile minds in science fiction to join him in expanding his rich Emberverse canvas. Here are inventive new perspectives on the cultures, the survivors, and the battles arising across the years and across the globe following the Change.

In his all-new story “Hot Night at the Hopping Toad,” Stirling returns to his own continuing saga of the High Kingdom of Montival. In the accompanying stories are fortune seekers, voyagers, and dangers—from the ruins of Sydney to the Republic of Fargo and Northern Alberta to Venetian and Greek galleys clashing in the Mediterranean.

These new adventures revisit beloved people and places from Stirling’s fantastic universe, introduce us to new ones, and deliver endlessly fascinating challenges to conquer, all while unfolding in a “postapocalyptic landscape that illuminates both the best and the worst of which our species is capable,” “a world you can see, feel, and touch.”

Contributors to The Change: Tales of Downfall and Rebirth Include
Introduction: The Change as Setting and Secondary World by S. M. Stirling
Hot Night at the Hopping Toad by S. M. Stirling
Rate of Exchange by A. M. Dellamonica
Tight Spot by Kier Salmon
Against the Wind by Lauren C. Teffeau
The Demons of Witmer Hall by M. T. Reiten
Bernie, Lord of the Apes by John Jos. Miller
The Seeker: A Poison in the Blood by Victor Milán
Grandpa’s Gift by Terry D. England
Fortune and Glory by John Birmingham
The Venetian Dialectic by Walter Jon Williams
The Soul Remembers Uncouth Noises by John Barnes
Topanga and the Chatsworth Lancers by Harry Turtledove
The Hermit and the Jackalopes by Jane Lindskold
The New Normal by Jody Lynn Nye
A Missed Connection by Emily Mah Tippetts
Deor by Diana Paxson

I am really curious about what Turtledove's "Topanga and the Chatsworth Lancers" is about. Could it be a homage to Stirling's The Peshawar Lancers? Meanwhile, John Birmingham blogged about his story "Fortune Glory". It is going to be a crossover with his The Disappearance series and will feature characters from those books. You can check out a brief snippet on Birmingham's blog as well.

Now this isn't Stirling's first foray into anthologizing one of his universes. In 2000, he released Drakas!, an anthology of short fiction set in The Domination of the Draka universe. What is unique about the Emberverse books is that there is a more content to pull from and it has a small fan fiction community. The main editor for that group, Kier Salmon, also has a work in The Change and some of her characters have made it into the canon. Could this be the beginning of a larger and organized fan fiction community for the Emberverse, similar to what happened to 1632? I guess we will have to wait until next summer to find out.