Got some new guest posts and reviews coming up here on The Update. Meanwhile. I have reviews of Johnny Alucard, The Long Earth and The Long War coming up soon at Amazing Stories. I hope you enjoy them all.

By the way, what did you think of our new videos segment? Did you like/hate it? Keep/delete? I want to hear from you. Comment or email us at ahwupdate at gmail dot com.

Cherie Priest has a new book coming out in Clockwork Century, her steampunk/alternate history universe. Called Fiddlehead, here is the description from Amazon:


Young ex-slave Gideon Bardsley is a brilliant inventor, but the job is less glamorous than one might think, especially since the assassination attempts started. Worse yet, they're trying to destroy his greatest achievement: a calculating engine called Fiddlehead, which provides undeniable proof of something awful enough to destroy the world. Both man and machine are at risk from forces conspiring to keep the Civil War going and the money flowing.

Bardsley has no choice but to ask his patron, former president Abraham Lincoln, for help.  Lincoln retired from leading the country after an attempt on his life, but is quite interested in Bardsley’s immense data-processing capacities, confident that if people have the facts, they'll see reason and urge the government to end the war. Lincoln must keep Bardsley safe until he can finish his research, so he calls on his old private security staff to protect Gideon and his data.

Maria “Belle” Boyd was a retired Confederate spy, until she got a life-changing job offer from the Pinkerton Detective Agency. Pinkerton respects her work, despite reservations about her lingering Southern loyalties. But it’s precisely those loyalties that let her go into Confederate territory to figure out who might be targeting Bardsley. Maria is a good detective, but with spies from both camps gunning for her, can even the notorious Belle Boyd hold the greedy warhawks at bay?

Another rollicking alternate history from Cherie Priest—Fiddlehead is the fifth book in the Clockwork Century steampunk series that started with Boneshaker.

Don't know anything about the series? Read my review of Boneshaker and Matt Quinn's review of Clementine to learn more. You can also read an excerpt of Fiddlehead book at Tor.com and check out S&L Podcast #144 which discusses Boneshaker.

Could this be a new segment? Perhaps, alternate historians do like there maps. First up, friend of The Update Daniel Bensen (American Nation-States, What if the War of the Worlds had actually happened? and What would Eurasia look like if it had been colonized and chopped up like North and South America?) showed me a map by an artist on deviantART called Alt-Reality titled "Turks and Me": 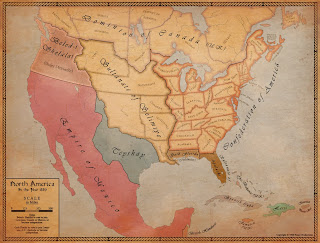 The map's POD is Turkey buying Louisiana from France instead of the United States, creating a Muslim empire in North America. A little ASB (did the Turks really convince enough people to colonize the Great Plains to prevent American western expansion) but it is pretty and there are a lot of cool maps on Alt-Reality's profile.

Still it times like this, as we make up history for fun, that there are people who are doing it for other reasons: 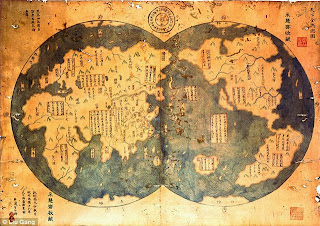 Gavin Menzies is claiming that this map from 1418 proves that the New World was discovered by China's Admiral Zheng He some 70 years before Columbus. Before you get excited, you might want to see this myth-busting article written by Dr. Geoff Wade.

Remember just because you saw it on the Internet, does not mean it is true.

Oct 29: Book discussion with Jeff Greenfield, author of Then Everything Changed, 43* and, his new book, If Kennedy Lived at Darien, CT.

Nov 9: The Biggest Liar In All The South contest at The Steampunk and Makers Fair in Lafayette, LA.

Dieselpunk for beginners: Welcome to a world where the '40s never ended by Aja Romano at The Daily Dot.

Fed Up on the Prairie, and Voting on Seceding From Colorado by Cheyenne Wells at The New York Times.
The Great Library at Alexandria was destroyed by budget cuts, not fire by Annalee Newitz at io9.
Latent Counterfactuals: Norway's Sabotage of Hitler's Atomic Bomb Project by Gavriel D. Rosenfeld at Counterfactual History Review.
Mike Ditka's biggest regret by Caitlin McDevitt at Politico.
No Hitler, No Holocaust (again) Gavriel D. Rosenfeld at The Counterfactual History Review.

Elementary 2.3: We Are Everyone at Thinking about books.