What if the War of the Worlds had actually happened? 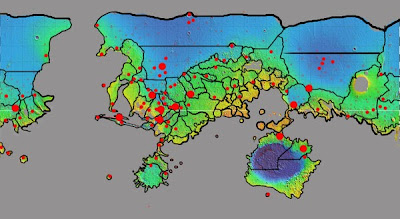 Seen here are the national boundaries of the generally recognized countries of Mars drawn over a false-color elevation map. Population centers are marked in red. Gray denotes uninhabitable areas.

Martian civilization developed in the deep equatorial valleys Buro'fa'sa-uu and then spread westward. Areas of low elevation became desirable as farmland, and there were several waves of invasions from the mountains to the lowlands. The lowlanders however, could grow more food than the highlanders, and so eventually developed armies that kept the highlanders in the mountains. In modern times, highland clans have combined to form nation-states, but they are still very fragmented. Lowland states are larger, more politically organized, and more advanced technologically except in the northern latitudes, where civilization gives way to nomadic tribes. The big basin of La-uu'hi/veo'sa-uu was discovered relatively recently and settled by northern lowlanders. It, and the two lowland equatorial areas form the three big political powerhouses (or "continents") on Mars. 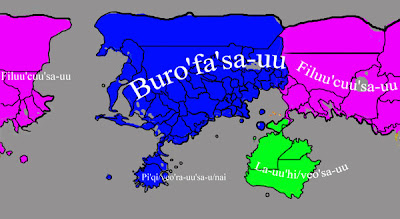 Surrounded by uninhabitable mountains, the lowlands of Mars form inverted "continents" in an ocean of peaks and plateaus.

The cradle of civilization in the equatorial valleys of the central continent of Buro'fa'sa-uu  still holds many ancient hill tribes. These inhospitable places form the ancestral homeland of most of the inhabitants of the more prosperous and advanced Buro'fa'sa-u/bo countries. Fewer tribes still persist in the uplands of the eastern continent of Filuu'cuu'sa-uu, although they are far more homogeneous. La-uu'hi/veo'sa-uu, settled in historical times by the Filuu'cuu'sa-u/bo'la-uu is more politically unified. The far northern steppes of Buro'fa'sa-uu and Filuu'cuu'sa-uu are not technically countries, but rather international territory claimed by various indigenous nomadic tribes.

Modern Martian politics could be described as the story of the old civilization of Buro'fa'sa-uu pitted against the more progressive Filuu'cuu'sa-uu and La-uu'hi/veo'sa-uu. The technical arms-race between the two in the 18th and 19th centuries by the human calender likely led to the developments that made the Earth Invasion possible, as well as the political climate that made the Invasion profitable.

Daniel M. Bensen is an English teacher and writer in Sofia, Bulgaria. He is currently preparing for publication his time-travel adventure/romance Groom of the Tyrannosaur Queen. Tune in to his podcast next week for more exciting developments in the world of Martian Law!
Posted by Mitro at 11:00 AM