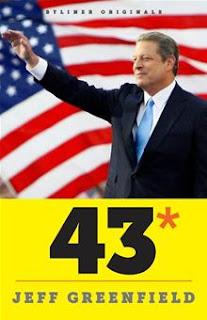 It was a familiar refrain from the political left all the way though the Bush years and ever since: "Everything would be different if only Gore had won the election". There would be no budget deficit, no Iraq War, everyone would still love the USA and we'd be well on our way to solving global warming. There have been many fantasies about this, including even a Saturday Night Live skit by Al Gore himself, but here it finally gets the full book treatment.

Normally the "President Gore" fantasies begin with the election night count itself, but here the author does something a bit cleverer, he moves the butterfly back a year to a little boy being washed up on a Florida beach. As a result, the Florida election turnout is slightly different enough to not need a recount, and so Al Gore returns to the White House as The Man rather then The-Man-In-Waiting. This isn't the only butterfly in the book, however, the second one blows the whole "9/11 was as bad as things can get" idea right out of the water. This particular twist sends subsequent events off on a direction totally different from our timeline - or does it?

The book itself takes a little bit of time to get used to - most alternative history books you read are about events and characters long since consigned to the pages of history, but here you are reading about events that you have lived though (or "would live through" maybe?), so it was slightly strange seeing characters and saying "ah yeah, I remember him".  One nice touch here is in the battle between the recently defeated Republican power players and the newly elected Gore -  a lot of the quotes here will look very familiar, as they are quotes used by the Republicans after Obama won in the 2008 election. For those who look back on the Post-Bush days through rose-tinted glasses and imagine a Gore presidency as a halcyon time of bi-partisan co-operation, this book may come as a rude awakening, but politics was never a gentleman's game, and we see this here in spades.

My one big issue with this book is the ending - in the context of the book itself, it's a good place to end, but it's a bit abrupt, you're left hanging wondering what will happen next. Will a second order counterfactual kick in for Iraq, or wont it? This is a book that begs for a sequel, although it is a clever move by the author to leave the public wanting more.