A Clockwork Heart by Liesel Schwarz

THE FINAL NOVEL IN SF GRANDMASTER MICHAEL MOORCOCK'S EPIC STEAMPUNK TRILOGY - BACK IN PRINT FOR THE FIRST TIME IN OVER 10 YEARS!

Bastable encounters an alternate 1941 where the Great War never happened and Great Britain and Germany became allies in a world intimidated by Japanese imperialism. In this world's Russian Empire, Bastable joins the Russian Imperial Airship Navy and is subsequently imprisoned by the rebel Dugashvii, the 'Steel Tsar', also known as Joseph Stalin.

Cayos in the Stream by Harry Turtledove

You're the greatest writer of the age, gone to ground and subsiding into drink. You always said you wanted to catch some of those Nazi bastards in the waters around your beloved Cuba. What happens when you actually get your wish?

Picking Up Plans In Palma by Matthew Quinn 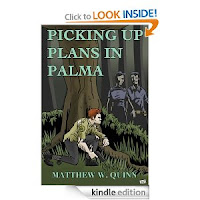 A slightly different Dutch War of Independence led to the establishment of a colony on the Cape of Good Hope in 1576. As the United States of America spread across North America the exiles who became the Afrikaners established their own empire in the Indian Ocean.

Fast forward to 1998. The Afrikaner Confederation and the United States, champions of hierarchical conservatism and egalitarian democracy respectively, have faced each other in a Cold War whose battlefields extend all the way the Moon. Treason in the Office of Strategic Services has left Connor Kelly, disgraced by his affair with an Afrikaner émigré, as the one man who can penetrate the Afrikaner Confederation. The prize? The plans for the Afrikaners’ powerful new battle-station.

But to bring back these vital plans Kelly must survive police, angry fathers, sadistic secret agents, and a brutal run for the shark-infested Indian Ocean...

Fans of “Coil Gun” (DIGITAL SCIENCE FICTION #3: PRESSURE SUITE) will appreciate this second foray into the world of the Afrikaner Confederation.

Hearts of Iron: A Foreworld SideQuest by Scott James Magner

When The Italian Job meets the Knights of the Round Table, the ultimate medieval heist caper is born.

It is the summer of AD 1035, and three sons of Tancred de Hauteville are in ambivalent service to Guimar, Prince of Salerno. The three men, who have been trained by their father in the art of war since childhood, spend the sweltering afternoons practicing swordplay, trading barbs, and thinking of how many men they would need to take the prince's poorly fortified castle for themselves.

But when a mysterious agent asks the prince for the brothers' services in obtaining a gilded chest, eldest brother William recognizes an opportunity to strengthen the Hauteville legacy. When he assembles a crew of skilled mercenaries, loyalties are tested and truths revealed. Among the group, there is a traitor, a spy, and the carrier of a long-held secret. The trust William places in each of his men will decide the future for himself and his family.

A bold new SideQuest in the Foreworld Saga, Hearts of Iron shows a different side of the Middle Ages, but with all the deft-sword play, historical accuracy, and political intrigue you would expect from the series that brought you The Mongoliad trilogy.

Fulfill your quest for global domination

Paradox Development Studio is back with the fourth installment of the game that defined the Grand Strategy Genre. Europa Universalis IV gives you control of a nation to guide through the years in order to create a dominant global empire. Rule your nation through the centuries, with unparalleled freedom, depth and historical accuracy.

True exploration, trade, warfare and diplomacy will be brought to life in this epic title rife with rich strategic and tactical depth.