Custer at the Alamo: An Alternate History of the New Texas 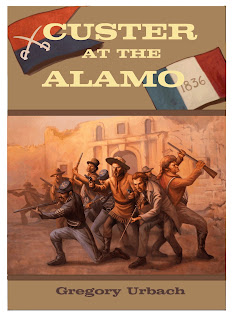 Custer at the Alamo (available for $2.99 at Amazon with a print edition due in the fall) is an alternate history novel with a small degree of time displacement.  In this thoroughly researched adventure story, Chief Sitting Bull knows his people will win the Battle of the Little Big Horn but perish on the reservations.  Just as the battle is starting, he prays to Wakan Tanka, the Great Spirit, to find a new path for his people.  On a ridge overlooking the village, Lt. Colonel George Custer and his brother, Captain Thomas Custer (twice winner of the Medal of Honor), realize they've stumbled into a big fight.  Tom urges a retreat, but Custer’s instincts tell him to attack.  The 7th Cavalry charges down Medicine Tail Coulee, but instead of reaching the river, they ride into a strange fog and a new version of history.

I've always been fascinated by the great losing causes: the Spartans at Thermopylae, the Old Guard at Waterloo, the British at Islandlwana, and the Marines at Wake Island.  Historians have said there has been more written about the Alamo and the Little Big Horn than any other U.S. battles except Gettysburg (Custer was at Gettysburg, too).  These famous events involve larger than life personalities.  George Custer, the brave but reckless cavalry commander.  Davy Crockett, backwoods hunter turned congressman.  General Antonio Lopez de Santa Anna, the Napoleon of the West.  Leaders such as Sitting Bull, William Barrett Travis, and Jim Bowie also play major roles.  What if these diverse characters came together in a clash that could change American history?

The story concept began with a simple plot; Custer would be sent back in time 40 years and win the battle of the Alamo.  My personal library on these subjects is so large that research was never a problem.  But there was a problem with the premise that the characters themselves quickly pointed out.  Would soldiers who had survived the Civil War now fight for Texas in 1836 knowing it will later join the Confederacy?  Probably not.  And what does Sitting Bull’s vision of a better life for his people have to do with the Alamo?  It took a good deal of time and thought to bring these elements into play, and I think the results will show an interesting version of what Texas might have become under different circumstances.

The Alamo has often been compared to Thermopylae.  Just as Leonidas waged a holding action against the vastly superior Persian army, the Texans in San Antonio were trying to hold back Santa Anna’s attempt to crush their revolution.  Few of the men defending the Alamo were soldiers.  Most were lawyers, doctors, shopkeepers, ranchers and adventurers.  The battle is not well documented.  No one knows exactly how many Texans were killed, or how many Mexican soldiers died taking the fort after a thirteen day siege.  Davy Crockett (David, as he preferred) was the most famous casualty, a former congressman trying to rebuild his fortunes after losing reelection.  William Barrett Travis was a rabble rousing lawyer from Alabama.  Jim Bowie was an infamous land speculator, militia leader and knife fighter.  None of them had any idea how to defend the broken down fortifications of the Alamo when the Mexican army suddenly arrived on February 23rd, 1836, marching out of the winter desert.

The Battle of the Little Big Horn was instantly controversial and has remained so ever since.  General Alfred Terry, who was in charge of the operation, blamed Custer for disobeying orders.  Elizabeth Custer blamed Major Marcus Reno, who had failed to go to her husband’s support.  For many years, Custer was considered a hero, the brave leader whose gallant last stand would forever be remembered.  In recent years, Custer has been made the great villain of the Indian wars, now being blamed for every wrong ever committed on the Great Plains.  This would have surprised Custer, for he saw himself as a soldier carrying out orders to the best of his ability.  As anyone who reads history knows, it’s folly to place the values of another time into our own framework and expect to appreciate them.

There are many factors that help make a simple story more complicated.  The defenders of the Alamo had no strategy for victory.  The chief engineer, Green Jameson, was a lawyer.  But George Custer was a graduate of West Point.  He was one of the Union army’s most successful commanders, and accepting defeat was not in his nature.  In this story, Custer does not have a large force, barely 125 men, but they are armed with the 1873 Springfield carbine, a far better weapon than a Brown Bess or Kentucky long rifle.  Custer’s officers carried repeating rifles, such as the Winchester, and all were armed with Army Colt revolvers.  These are not huge advantages when facing a trained army of thousands, but they help.

The Texas revolution was not just about white Americans coming for free land.  The Native Americans, especially the Comanche, considered Texas to be their country.  The Tejano population generally opposed Santa Anna but did not trust the new rebel government.  The Cherokee, forced off their Eastern lands by Andrew Jackson, were tying to build new homes in North Texas.  And even though it was illegal, slaves were being imported to work the new plantations.  After winning independence at the Battle of San Jacinto, Texas passed a rigid slave constitution, joined the Union in 1845, and seceded in 1861.  Much of what would happen was unknown in 1836, but Custer and the 7th Cavalry come from 1876.  What effect, if any, will their knowledge of the future have?

I did not want cardboard personalities for this novel, spouting facts and changing events at random.  I wanted real people, with real problems, figuring their way from one situation to the next as best they could.  Reviews of Custer at the Alamo have supported this vision.  Though the plotlines are filled with historical details, what really makes the novel worthwhile is the characters.  As Mr. Norman Stiteler of Frisco, Texas wrote, “the characters are surprisingly human, cantankerous and complex.”  Just as history should be.

Gregory Urbach, an Urban Studies graduate from California State University, Northridge, has been writing science fiction and fantasy for 20 years.  His works include the nine-book Waters of the Moon series (the Tranquility books) and Magistrate of the Dark Land.  He has a website at www.custeratthealamo.com and can be contacted at his Facebook page.
Posted by Mitro at 11:00 AM