A Brief Summary of the Alternate History Genre in Hungary

What if the Nazis had won the Second World War? What if the Confederacy had taken over the Union? Tempting questions – with thousand and one answers. These are  the most popular periods in English alternate history novels from Philip K. Dick to Robert Harris, let alone the enormous bibliography of Harry Turtledove. I can’t deny that these events were real turning points of recent history. A fascist Britain? A communist America? These can be very exciting topics, even for a Hungarian. But what can I say? I’m bored of these books. There are so many other fields of history. So what about Hungary? Are we interested in other topics?

In Hungary, we have very few novels in the genre. Exactly: seven, and I’m counting the one I co-authored. Not a popular genre, you may say, but hell, we just rediscovered the whole detective fiction with Kondor Vilmos’s brilliant Budapest-novels. The lack of this genre is more surprising when you learn about our miserable history: Hungarians are constantly whining about how fate or God screwed us throughout history. It would be logical, though, to have a flourishing alternate history subculture. We don't have it, however, unless you count the often antisemitic conspiracy theorists or the believers of Sumer/Japanese/Tibetan/Korean/Syrian ancestry.

Three of the seven Hungarian AH-novels deal with the utterly boring question of what-if-the-Nazis-had-won-the-war. Gáspár László wrote the Mi, I. Adolf (We, Adolf I), a novel about the prosperous post-war German empire. In the A negyedik birodalom (The Fourth Reich) by Galántai Zoltán (W. Hamilton Green) the space-conquering Nazis have to fight an alien enemy. And lastly Trenka Csaba Gábor’s Egyenlítői Magyar Afrika (Hungarian Equatorial Africa) takes us to a Hungarian colony in Africa and shows us the end of the Nazi regime through the eyes of a young colonist.

The three other novels deal with the Ottoman and Soviet conquerors of the country. In the Ezüst félhold Blues (Silver Crescent Blues) Gáspár András examine a world where the Ottomans have never been defeated and Hungary is still a Turkish territory in the 20th century. Trenka Csaba Gábor’s fresh novel, Place Rimbaud takes a similar approach and shows us a contemporary Hungary dominated by the Ottomans and a world dominated by France. In László Zoltán’s novel Hiperballada (Hyperballad) computer technology developed faster in the Soviet Union, and Hungary is still on the wrong side of the Iron Curtain.

But I have always thought Hungary and Central Europe have far more exciting opportunities than these. What if St. Stephen, the founder of Hungary lost the decisive battle against the pretender Koppány? What if Matthias Corvinus had had a rightful, powerful heir who could have organized the army and could have brought in some international help against the Ottomans in 1526 at Mohács? What if John Sobieski of Poland had not honored his obligations in 1683, and the Ottomans could have taken over Vienna? And what if the Hungarian rebels had defeated the Habsburg armies at some point in the freedom fight in 1848 or 1849?

This last one is my favorite question, which I examined with my co-author Pintér Máté in the novel A szivarhajó utolsó útja (The Last Journey of the Cigar Ship). Our divergence point is in 1848, when an engineer invents a Gatling-gun-like weapon in Munkács, Hungary. With the help of this “Wunderwaffe” the Hungarian army can stop the intervening Russians at the Dukla Pass and later they can occupy Vienna. As a result of this the Habsburg Empire’s minorities join the rebellion and  they form the Danubian Confederation together. In the next decade Poland and most of the Balkans are liberated, Italy and North Germany are unified with the help of the Danubian Confederation. In 1860, the Confederation has eleven members: Bavaria (with Baden and Württemberg), Austria, Hungary (with Slovakia), Bohemia, Slovenia, Croatia, Serbia, Romania, Bosnia, Transylvania and Bulgaria. 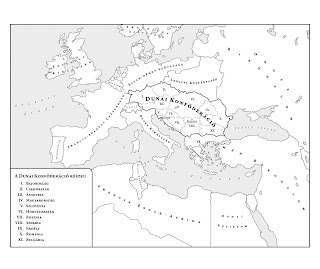 In 1888, the Danubian Confederation and the allied countries (Italy, the North German Federation and Poland) are threatened by the neighboring powers: the Russian Tsar, the French Emperor and the Turkish Sultan are just waiting for a proper reason to start a war. While the external threat is increasing, a mysterious villain, Árny (Shade) is preparing to steal the first battle airship in order to bring the country to anarchy. Only a few people could bring the situation under control: Kossuth Csaba, a young cavalry officer, grandson of Kossuth Lajos, the founder of the state; Ana Pejnovic, the beautiful Serbian agent of the Secret Service and Nemesházi Bence, a dynamic politician of the Danubian Civic Democratic Party.

So this is the situation in Hungary. Few books, half of them about the Nazis, yet endless opportunities in our history.

Pintér Bence is a journalist at the Hungarian online newspaper mandiner.hu and the co-author of the alternate history novel A szivarhajó utolsó útja. He studies 19th century diplomatic relations at the Eötvös Lóránd University. You can follow him on Tumblr.
Posted by Mitro at 11:00 AM