The fantastic conclusion to the Spiritwalker trilogy!

Trouble, treachery, and magic just won't stop plaguing Cat Barahal. The Master of the Wild Hunt has stolen her husband Andevai. The ruler of the Taino kingdom blames her for his mother's murder. The infamous General Camjiata insists she join his army to help defeat the cold mages who rule Europa. An enraged fire mage wants to kill her. And Cat, her cousin Bee, and her half-brother Rory, aren't even back in Europa yet, where revolution is burning up the streets.

Revolutions to plot. Enemies to crush. Handsome men to rescue.

Cat and Bee have their work cut out for them.

The Miss Education of Dr. Exeter by Jillian Stone

From steam-powered bunkers to steamy boudoirs, paranormal detective Phaeton Black knows his way around Victorian London. But sometimes, when you slip down a rabbit hole, there's no turning back. . .

Phaeton Black is missing. Sucked into an alternative universe--courtesy of Professor Lovecraft's Trans-Dimensional Injection Portal--the illustrious investigator is nowhere to be found. Even the bewitching Miss America Jones, who's pregnant with Phaeton's child, has no clue to his whereabouts. But when a spy fly's microphone picks up Phaeton's voice in the parlors of Paris, she enlists his dearest friends to track him down--before his deadliest enemies find him first. . .

Accompanied by the dashing Dr. Exeter, his delightful ward Mia, and a trusty duo of Nightshades, it's off to the City of Lights for the determined Miss Jones. Unfortunately, there is something about Paris in the fall that brings out the devil in Dr. Exeter--and the beast in mild-mannered Mia, whose animal urges transform her into a gorgeous panther. With physical reality unraveling on both sides of the cosmic rift, the good doctor must extract Phaeton Black from the clutches of a diabolical techno-wizard--or both could lose the women they love to love. . .forever.

Winner of the World Fantasy Award and the Sidewise Award for Alternate History: A pastel-hued yet chilling alternate vision of England, The Summer Isles views the nightmare that the country has become since Germany’s victory in the Great War, through the eyes of a man whose life lies close to the heart of history

In 1918 the Allies were defeated. A closeted gay teacher, Griffin Brooke has witnessed the monumental changes his nation has undergone since being crushed by Germany’s superior fighting forces twenty-two years earlier. First came the financial collapse and crippling inflation, then the fascist uprising in the thirties that brought John Arthur to power. Now, in 1940, England has resurrected itself—but at a terrible cost. With homosexuality decreed a serious crime against the state by the dictator who was once his most avid student, Griffin has remained silent while England’s gay population has mysteriously dwindled . . . along with the nation’s Jews.

But in the twilight of his years, elevated to the role of tutor in an Oxford college, Griffin is getting anxious. Thinking back on a life lived in shadow—and on his one great love affair with a young soldier during the height of the Great War—Griffin knows that revealing a secret he has guarded for decades could have devastating consequences for Britain, the world, and especially for the fascist tyrant Arthur, who cites his former teacher as a mentor and major influence.

Wake Up and Dream by Ian R. MacLeod 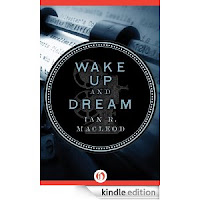 Winner of the Sidewise Award for Alternate History: Nineteen-forties Hollywood is dazzlingly transformed and recreated in this alternate history fantasy noir about former screen actor–turned–private eye Clark Gable who investigates a deadly conspiracy in a neo-fascist Tinsel Town

In a different 1940, with Europe in flames and an anti-Semitic America creeping towards fascism, movie making has been revolutionized: A wondrous technological advancement made possible by the discovery of the Bechmeir field now transmits actors’ emotions directly into the minds of the audience—effectively ending the acting career of a cynical loner named Clark Gable.

No longer a handsome screen idol, Clark now makes his living as an unlicensed matrimonial private eye. When gorgeous April Lamotte contacts the low-rent gumshoe, he sees a golden opportunity to make some quick and easy cash. All he has to do is impersonate April’s wealthy,reclusive screenwriter husband, sign a contract for a new biopic, and then slip back into the shadows. But when someone tries to assassinate Clark and pass it off as a suicide, he realizes he’s gotten too deep into something deadly. And as more and more of the Hollywood elite start turning up dead, Clark must race to uncover the shocking truth behind the Bechmeir field’s origins, and expose a terrible secret that someone’s all too willing to kill for.

Matt Mitrovich is the founder and editor of Alternate History Weekly Update and a blogger on Amazing Stories. His new story "The Enchanted Bean" can be found in Once Upon a Clockwork Tale from Echelon Press. When not writing he works as an attorney, enjoys life with his beautiful wife Alana and prepares for the inevitable zombie apocalypse. You can follow him on Facebook or Twitter.
Posted by Mitro at 12:00 PM