New Orleans by Gaslight: The First Anthology of Steampunk Fiction and Poetry Set in The Big Easy 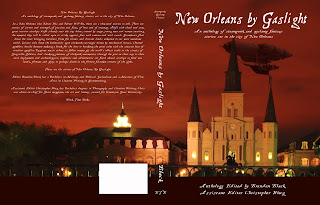 The first-ever anthology of fiction and poetry set in the city of gas lamps, gumbo, and steamboats, all with a steampunk twist, is now available. Here is the description from Amazon:


In a New Orleans that Never Was and Never Will Be, there are a thousand stories to tell. There are stories of sorrow and triumph, of passion and fury, of love and of revenge. Aloft with cloud and sun, great warrior airships drift silently over the city below, crewed by eager young men and women awaiting the moment they will be called upon to strike against foes with cannon and with sword. Steamboats float down the river bringing travellers from far climes and distant lands unknown to our more mundane world. Lovers ride down the boulevards upon clockwork carriages drawn by mechanical horses. Cheated gamblers decide between making a break for the door or breaking the quiet calm with the staccato beat of revolver gunfire. Ragtime music echoes as fallen women ply the world's oldest trade in the streets of Storyville. Soldiers lead clanking platoons of clockwork automatons through the port on their way to their next deployment and archaeologists, explorers and adventurers set forth aboard airships to find new lands, fortune and glory or perhaps death in the forlorn forsaken corners of the globe. These are the stories of New Orleans By Gaslight.

This post is based on a press release submitted to Alternate History Weekly Update. If you have a work you would like, submit your press release to ahwupdate at gmail dot com.
Posted by Mitro at 11:00 AM