And now the final author interview in my series for Once Upon a Clockwork Tale. Welcome to The Update Ella Grey: 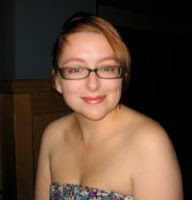 I don’t remember a time when I didn't want to be a writer. It’s a dream that I achieved recently, first with Echelon Press and then Evernight Publishing. Working with two publishing companies helps me explore very different genres.

I can usually be found in front of my netbook after I've put my son to bed.

The first steampunk story I ever read was Lady Dorn by Sean Hayden and I was hooked. It took me awhile to find a story that I wanted to write but "Wings" will certainly not be my last story set in a steampunk world.

What is "Wings" about?

"Wings" is based on The Grimm Fairy-tale "The Wild Swans". It tells the story of Winifred Bell, the youngest child in the Bell family. She’s a girl who wants to be an Augmentation Scientist like her father, unfortunately society isn't ready for a girl to be in the Hall of Scientists, which means her father has taught her himself in secret.

I thought that "The Wild Swans" would make a wonderful steampunk story. The idea of clockwork wings and the science of augmentation, which is what Winifred’s father specializes in, just screamed steampunk to me.

I reread the original story and talked to other writers of the genre. I also spent a lot of time on the Steamed website, which has some great resources on it.

I’ve got several projects that I’m working on at the moment. Thankfully those are mostly short stories but I’m also working on a sequel to a free read I have out. That’s intended for an adult audience.

I heard about Echelon Press from Nick Valentino, one of their writers and he suggested that I submit a story to them.

I’m a little busy at the moment but I just brought Cassandra Clare’s A Clockwork Princess to read. I've really enjoyed the series so far and it has a beautiful cover.

This is actually the hardest question in the whole bunch. I've always wanted to be a writer and I can’t imagine doing anything else. If you want to be a writer and you can handle everything that comes with it, rejection and marketing, which is time consuming. If you've got characters running around your head, who don’t shut up, then be a writer. There is no advice I can give you that will help except grow a thick skin. You will find people who don’t like your work and they might not be that shy in telling you that they hate it. In the end, don’t write for anyone but yourself, ignore bad reviews and be a marvel at marketing.
Posted by Mitro at 11:00 AM

Email ThisBlogThis!Share to TwitterShare to FacebookShare to Pinterest
Labels: Echelon Press, Ella Grey, Once Upon a Clockwork Tale, Steampunk, Wings