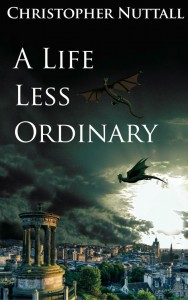 A Life Less Ordinary, the latest novel from long-time contributor Christopher Nuttall, author of The Royal Sorceress and Bookworm, published by Elsewhen Press, an independent publisher of SF based in the UK.  A fantasy novel for adults, it is set in a magical Edinburgh where dragons fly through the sky, the castle glows blue and strange creatures trade in the Grassmarket.  Here is the description from Elsewhen Press:


Having lived all her life in Edinburgh, the last thing 25-year old Dizzy expected was to see a man with a real (if tiny) dragon on his shoulder.  Following him, she discovered that she had stumbled from her mundane world into a parallel magical world, an alternate reality where dragons flew through the sky and the Great Powers watched over the world.  Convinced that she had nothing to lose, she became apprenticed to the man with the dragon.  He turned out to be one of the most powerful magicians in all of reality.

But powerful dark forces had their eye on this young and inexperienced magician, intending to use her for the ultimate act of evil – the apocalyptic destruction of all reality.  If Dizzy does not realise what is happening to her and the worlds around her, she won’t be able to stop their plan.  A plan that will ravage both the magical and mundane worlds, consuming everything and everyone in fire.

Despite being a fantasy, with magic and dragons, this is definitely a story for adults not children, revealing the darker side of the magical world.  Addressing serious issues such as betrayal, revenge, and free will, it is nonetheless being called a fantastic adventure made all the more exciting by being set in the familiar environment of Edinburgh, one of the most vibrant capital cities in the world.

A Life Less Ordinary is published in digital editions, available from Apple iBookstores, Kobo, Amazon Kindle stores and other online retailers, and will be published in a print edition in September.