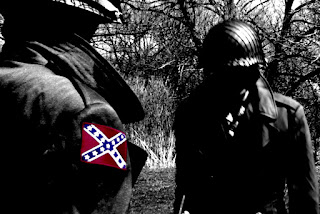 An intriguing new Kickstarter called The Confederation has caught my attention. It is a proposed web series set during the 1960's in a world where the South won the American Civil War. The story follows a squad of Confederate female snipers fighting in the Cuban War and a group of former slaves. You can check out the trailer here.

The point of divergence for this timeline is the Battle of Puebla in Mexico, May 5th 1862. In our timeline, the Mexicans win the battle, but in The Confederation timeline, the French win the battle, setting off a chain reaction that unintentionally alters the course of the American Civil War. The producers picked Puebla because it had, at least on the face of it, no influential role in the outcome of the American Civil War. They are firm believers in the butterfly effect, which is refreshing.

The producers hope to raise funds in order to produce the first season of the series and they are asking for $50k, which will be used to cover costs involved with creating and distributing the series, including travel and lodging expenses, paying the cast and crew, location fees, advertisements and equipment.

They plan to create at least eight episodes that will be distributed on Blip.tv, which is home to shows like  Red vs Blue. Each episode will be between 10 to 15 minutes long. The series will be in black and white, but will have some items (ex. flags) in color, similar to the style of Robert Rodriguez's Sin City or Gary Ross' Pleasantville.

$50k certainly sounds like an ambitious goal, but I am curious to see this web series get made. With so much alternate history television being made in the UK, it would be nice to watch a show that us Yanks can access. Good luck to the producers and as for the rest of you, go check out their Kickstarter.