Reading is important. I shouldn't have to tell you guys that, but I got the feeling last week that not everyone reads as carefully as they should.

First, I want to say thank you for all the great comments I received on Facebook, Twitter and on the blog for my recent article about the impact of steampunk's growing popularity on the alternate history genre. Some of the comments, however, were a little odd. I got the feeling that people were just answering the question I posed (Is steampunk's growing popularity destroying the alternate history genre?) when promoting the article instead of reading the article. This was confirmed after one commenter admitted he should have the read the article before commenting. If you have commented on one of my posts without reading the article, please go back and read it in case there has been any miscommunication between us.

Good news everyone. This May I will be announcing how you can get paid for submitting articles and stories to The Update. I am still working out the particulars, but I believe everything should be sorted out by next month. I look forward to this new evolution of The Update. In the meantime, I am still accepting submissions for articles and original fiction. This is a great way to introduce people to your writing and although you will not get paid now, you will still get free promotion for any of your sites or projects. Email me at ahwupdate at gmail dot com for submissions or questions.

The Internet is still talking about the steampunk/alternate history game BioShock Infinite and the praise keeps coming in. Joe Frye of Penn Live gave it a 9 out of 10 and said "Infinite aims to do something different from the competition, and it succeeds in a big way." Even Robert Brockway of Cracked pointed out how the "intentional" flaws of the game still make for a great experience. If words are not enough for you, however, just know that numbers don't lie and it should mean something when a game tops the UK charts. 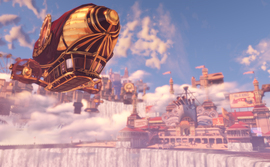 Those looking to learn more about the game can check out Ken Levine, creative director and co-founder of Irrational Games, talk about Infinite and the future of gaming during an episode of On Point with Tom Ashbrook. Also if you ever wondered how plausible a floating city could be, check out Kyle Hill's article on the subject at io9 (spoiler alert: its not plausible).

Paradox Interactive would like to remind us of some upcoming games. Although you can see the full release schedule on their website, below are some upcoming releases I think you would like.

First we have Victoria II: Heart of Darkness. Here is how Paradox describes the game:


The guile and greed of Victorian politics and economic conquest have found their way to uncharted Africa in a new expansion for Victoria II! Expand to a new continent and claim the wealth waiting for you – assuming the other world superpowers don’t beat you to it. Guide your empire through the treachery and double-dealing of the late 19th century in Heart of Darkness, with a new colonization system, naval battles, and international political turmoil between powers great and small.

More on that game later this week. Next up we have Crusader Kings II: The Old Gods:


In the year 867, the Old Gods were still mighty, as the Raven Banner flew over the Great Heathen Army, the state of Russia took form, and Pagans rode across Central Europe. The Old Gods adds these brutal new armies and a wealth of features to the celebrated gameplay of Crusader Kings II, granting players several of their most-desired new abilities. Forced conversions, organized rebels, pillaging and brutal expansions all wait to challenge would-be kings in this new expansion pack – which also makes Crusader Kings II Paradox’s game that spans the longest period of history!

Editor's Note: I removed the rest of this entry because it looks like it was an April Fools Joke. Damn, and I thought I managed to avoid all of them. -Matt

Today to May 4: Steampunk Art Show at Open at WarmStreets Gallery in Lynchburg, VA. You can find more information here as well.

May 9: Last day to fund HPPodcraft - Live in Providence! on Kickstarter.

10 Things To Know About Kickstarting a Book by Rebecca Joines Schinsky and Jeff O’Neal at Huff Post.

The Big “What If?” by Seleste deLaney at Steamed!

EXCLUSIVE EXTRACT: read the first part of THE GOOD, THE BAD AND THE INFERNAL by Guy Adams! at The Solaris Editor's Blog.

Four Dimensional Portals to Other Worlds at Rudy's Blog.

If David Tennant had stayed on Doctor Who, he would have traveled with Amy Pond by Lauren Davis at io9.

Inceptio by Alison Morton at Books and Beverages.

Adam Christopher at My Bookish Ways.