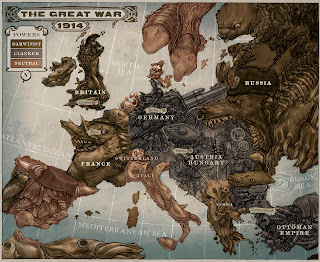 I know the title sounds a little over-dramatic, but that is the gist of the article from Abraham Riesman over at Motherboard. Before you get huffy, know that Abe has some pretty good sources to back up his claim. He based his arguments from statements made by Robert Schmunk, admin of Uchronia, and Evelyn C. Leeper, one of the judges for the Sidewise Awards for Alternate History. So these guys know what they are talking about...probably even better than I do!

Here is a quote from Schmunk that best captures the theme of the article:


“In the past several years, alternate history has been fading, or perhaps I should say morphing, because there’s been a big increase in the publication of steampunk stories and novels...Many steampunk works are legitimately alternate history, but a lot are not.”

Now we know computers have predicted steampunk to be the next big thing and I already shared my doubts about alternate history breaking into the mainstream (although Sean Korsgaard took a more optimistic approach) but is this really the end for the genre? Has our golden age come and gone (which according to the article was in the 1990s)? Did steampunk kill alternate history?

Why you ask? As the article itself admitted, alternate history has been around for a long, long time. People have been asking what ifs for centuries, while steampunk is still relatively new. Alternate history can transcend genre and can encourage established literary authors to tackle an SF story without it ever being called "sci fi."

Furthermore, you just never know when a trend will change. Vampires can only be sexy for so long before they return to their horror roots. People's tastes can change with a wind, often before the entertainment industry even realizes what has happened. The bubble may one day burst on steampunk or it might evolve just as alternate history has over the years. Only time will tell.