Did something different this week:
Sorry for all the times I slammed my hand on the desk, haha. Enjoy the rest of today's Weekly Update without having to hear my Midwestern/Chicago accent.

The first two stories in Charles Stross' Merchant Princes series are being bundled in a new book titled The Bloodline Feud. Here is the description from Falcata Times:


The Family Trade and The Hidden Family - The first two installments of the Merchant Princes series combined in one volume. Miriam Beckstein is a successful reporter for a hi-tech magazine. So when she discovers a huge money-laundering scam, she thinks she's hit the big time. But when she takes it to her editor, not only is she fired, but she starts to receive death threats. And that's just the beginning. To distract her furious daughter, Miriam's adoptive mother unearths mementos from her real mother, murdered when she was an infant. But these reveal a secret that will ultimately throw entire governments into disarray. For what Miriam thinks is a simple locket has the power to fling her into an alternate timeline. In this less-developed world, knights on horseback wield automatic weapons, and world-skipping assassins lurk -- all on the other side of our reality. Here, her true family runs a criminal empire -- and they want her back. But Miriam has other plans.

Falcata Times also reviewed the new collection calling it "one hell of a ride". If you want to learn more about the republishing, check out Stross' article on Tor where he discusses how his series came about. You also might like this joint interview he does with Cory Doctorow to promote their novel The Rapture of the Nerds. 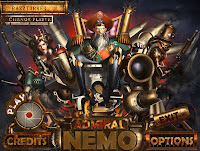 Steampunk is a growing subgenre of SF&F. It combines the elements of the Victorian Era with modern technology and ideas. Writers such as Jules Verne, Hans Dominik and Robert E. Howard with their groundbreaking visions are considered to be "inventors" and their visions can be rediscovered in multiple movies, comics and games up to this day.

The Ukrainian developer, Applejuice Studios, has also dedicated itself to that topic and has thereof created an action packed arcade shooter. The object of the game is to stop diverse invaders, who are trying to attack from the sea, from capturing the lands with the last remaining battleship and to rebuild the capital city for the purpose of strengthening your own forces. For combating the attackers, which are are attacking from above and below the water as well as from the air, there is a stationary defense weapon available which fires different types of ammunition. After every level, there is a possibility to restore buildings which increases your own combat power.

Admiral Nemo is available for download for 9.99 EUR (12.99 USD) on the following portals: Gamersgate, RAINdg and GetGamesGo.

April 24: Lavie Tidhar will be interviewed by Edward James in London, UK.

May 1: Deadline for submitting to Mothership: Tales from Afrofuturism and Beyond.

May 28: Indie-rock group Imaginary Cities is releasing its second album, Fall of Romance.

The forgotten man who almost became president after Lincoln by Scott Bomboy at Yahoo.

Herodotus' Alternate History by J.M. McDermott at Welcome to the Maze.

Justin Bieber believes Anne Frank would have been a big fan of his, if only the Holocaust hadn't happened by Sean O'Neal at AV Club.

Rewriting history: How UK might have been without Thatcher by Simon Hooper at CNN.

Speculative Fiction's Love Affair with Sherlock Holmes-It's Not a Mystery (Part 1) by John DeNardo at Kirkus.

Steampunk Cannons by Zoë Archer and Nico Rosso at Steamed!

What if he had become Egypt’s President Shafiq? by H.A. Hellyer at Al Arabiya.

The 10 Best TIME-TRAVELING VILLAINS of All Time! by George Marston at Newsarama.

Bioshock Infinite and the Components of Video Game Storytelling by Chris Gerwel at The King of Elfland's Second Cousin.

Alan Moore at The Beat.

Character interview with a Hero–Connor MacKay, from Cards & Caravans at Steamed!

Ratchet Retrocast Episode 7: Was that a Terminator or a naked Barbarian? Either way, it’s the Schwarzenegger Action Hour! at Earth Station One.

‘Revolution’ Finale Pushed To June After Pre-Emption For Bombing Coverage by Nellie Andreeva at Yahoo.