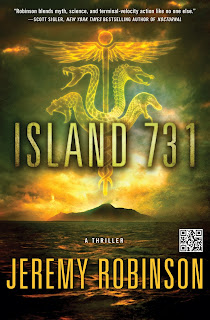 The subject of genetic engineering is one that occasionally rises to the surface of public consciousness before being pushed back down by whatever a-list star is having a melt-down this week or some other equally pressing and vital news topic. Everyone has heard of what the Scots have done with sheep (I meant Dolly the clone of course, what did you think I meant?), and the topic of GM foods occasionally makes the headlines when some health watchdogs decide to dig into what exactly goes into our "frankenfood". All of the alleged dangers however are fairly benign compared to what could really be done when science loses its moral compass. What do I mean? Well, let's step onto the shores of Island 731 by Jeremy Robinson (author of SecondWorld) and find out....

The story begins in 1941 with a shipwreck. A critically wounded US Navy sailor is washed up on the beach of a deserted island, only to soon find that he's not alone. Fast forward to the present day, and a research vessel studying the Mid-Pacific gyre gets caught up in a storm and  finds itself at the same island. With two crewmembers missing after the storm, they start searching the island only to discover that during the war, it had been used as a research base by the infamous Unit 731, a Japanese army medical unit whose  chemical/biological warfare research on captured prisoners in China made Dr Mengele look like Mother Theresa. When more crew start disappearing though, they realise that perhaps for this Japanese unit, the war may not have ended in 1945, and neither did their research.....

In general, the book is very fast-paced, with enough twists and turns along the way to keep the reader eager to turn to the next chapter. In one way, it sort of feels like a computer game, with each "nasty" that the crew run into being that little bit bigger and nastier than the last (it sort of reminded me of the game Far Cry actually). This does somewhat lead to a slight loss of believability near the end, but its a fun kind of "ah c'mon now, that's going a bit too far".

On the human side, the main characters are fleshed out and sympathetic enough that you do end up rooting for them to survive, unlike a lot of books of this type where the hapless victims only seem to be there as "beastie fodder" and to provide the raw ingredients for the blood & gore. The plot twists are worked in well enough that while some come as less than a total surprise, others do give you a moment of "wait, what?" and actually serve to further the plot rather than just acting as an annoyance ( yes, I'm looking at you, Lost...).

So. overall an enjoyable read, and while it's not going to make the science textbooks as an example of the dangers of genetic engineering, there's enough on there to make you wonder at what's going on behind the scenes at some of the things you read about in the news, and maybe look twice at the spider in the web on your wall.....