This handsome hardcover edition of The Mongoliad: Book Three features exquisite foil stamping, deckled edges, a ribbon marker, an illustrated character glossary, and a Foreworld map printed on the end- sheets. It also includes Seer: A Foreworld SideQuest. This short story was previously available only digitally and sets up characters and events in The Mongoliad.

The final book of the Mongoliad trilogy from Neal Stephenson and company tells the gripping personal stories of medieval freedom fighters to form an epic, imaginative recounting of a moment in history when a world in peril relied solely on the courage of its people.

The shadow of Holy Roman Emperor Frederick II hangs over the shattered Holy Roman Church as the cardinals remain deadlocked, unable to choose a new pope. Only the Binders and a mad priest have a hope of uniting the Church against the invading Mongol host. An untested band of young warriors stands against the dissolute Khan, fighting for glory and freedom in the Khan’s sadistic circus of swords, and the brave band of Shield- Brethren who set out to stop the Mongol threat single-handedly race against their nemesis before he can raise the entire empire against them. Veteran knight Feronantus, haunted by his life in exile, leads the dwindling company of Shield-Brethren to their final battle, molding them into a team that will outlast him. No good hero lives forever. Or fights alone.

Angels of Vengeance by John Birmingham

When an inexplicable wave of energy slams into North America, the world is plunged into turmoil—as wars erupt, borders vanish, and the great and powerful fall.

Against this dramatic backdrop, three very different women navigate the chaos. Deep in a South American jungle, special agent Caitlin Monroe will stop at nothing to discover how a master terrorist escaped a secret detention center in French Guadeloupe to strike a fatal blow in New York City. Sofia Peiraro, a grieving teenager trying to rebuild her life in Kansas City, is drawn back to Texas by a vicious murder. And in the fashionable bars and boutiques of Darwin, the seething, growing freeport in Australia’s deep north, the British-born aristocrat-turned-smuggler Lady Julianne Balwyn hides a pistol in the small of her lovely back. She is hunting for the man who is hunting her. As these women fight for survival, justice, and revenge, humanity itself struggles toward its better angels—and to purge its worst demons.

Check out all of our reviews for the Wave trilogy (Without Warning, After America and Angels of Vengeance).

Any Day Now: A Novel by Terry Bison

This tour de force, road movie of a novel is a poignant excursion into the last days of the Beats and the radicalized culture of the 1960s, from Kentucky to New York City and beyond. Written in a voice that is warmhearted and hauntingly original, Any Day Now is the story of Clay, a small-town boy whose future is all mapped out. It travels as far as an isolated New Mexico commune under threat from a national revolution, with Clay battling to find his place in the new America -- and hoping desperately to forget what happened back East with the girl he loved.

Bisson, whose prose brings to life this wild tale in the vein of Philip Roth's The Plot Against America, has written a transcendent commentary on America's civil liberties and the perils of growing up, then and now.

He came back to kill a tyrant. He found the Devil instead. An amazing historical novel with a supernatural twist set after the English Civil War. This is the stunning debut from Clifford Beal.

He came back to kill a tyrant. He found the Devil instead.

London Darkness: War of the Devices by Christopher Stocking

Fifteen years have passed since the events with Caiden and the forces of Partum Chaos transpired, and the League of Inventors is flourishing with Ryker and Adelina as Head Inventors. London's defenses are at peak performance, and all seems well for Ryker; his wife, Celia; and Lance, their fifteen-year-old son. But, when a mysterious Frenchman arrives with talks of impending war, American musicians in the forest, and strange automatons, Ryker must figure out who is his friend, and who is his foe in order to save what he has worked so hard to create.

When a quantum supercomputer's "reality simulator" program causes temporary insanity in its beta-testers, Lee Green rolls up his sleeves and dives into a virtual world to debug the problem. Only he discovers that place is more real than anyone imagined. He finds alternate versions of his friends in that mad science reality, their lives and relationships very different from those in the "real" world. Quantum entanglements become romantic entanglements as he meets his love again in each new dimension. Lee must save these other lives, decide which destiny is truly his, and what he's willing to sacrifice to get there.

Secrets of the Fire Sea by Stephen Hunt

The isolated island of Jago is the only home Hannah Conquest has ever known. But her carefree existence comes to an abrupt halt when her guardian, Archbishop Alice Grey, is brutally murdered. Someone desperately wants to suppress a secret kept by the archbishop, and if the attempts on Hannah's own life are any indication, the killer believes that Alice passed the knowledge to her ward before her head was separated from her neck.

Meanwhile, a deadly power struggle is brewing on Jago. And as Hannah digs deeper into the mystery Alice left behind, assisted by two rather different detectives, she must race to unravel a chain of ancient riddles in order to save not just her own life, but her island home itself!

Secrets of the Fire Sea is a rollicking tale of high adventure and derring-do set in Stephen Hunt’s Victorian-style clockwork world filled with steammen and aliens, fantastical creatures and dastardly villains…and some remarkable heroes that steampunk fans will cheer for. 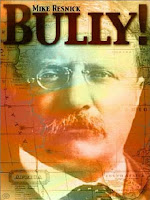 In March 1909, Theodore Roosevelt went on a safari to central Africa. In this fictionalized account of that trip, Mike Resnick takes us on an amusing “what-if” with Roosevelt deciding to “liberate” the native Africans from Belgian rule and to set up a model democratic state in the heart of Africa.

Check out my review of the anthology The Other Teddy Roosevelts which contains this short story.

When a merchant appears at the Catalonian chapter house of the Shield-Brethren, seeking to hire guards for his caravan, young Andreas is suspicious. Knights with his martial prowess are above protecting mere cargo wagons. Yet Andreas’s wanderlust outweighs his concern, and soon the group is headed to the merchant’s mountain village—and into great danger.

As the caravan approaches, a woman suffering from terrifying visions feverishly paints her latest revelation—in her own blood. The image horrifies her fellow villagers, who fear an imminent attack, or worse, the return of the brutal Inquisition. But when Andreas deciphers the painting’s true meaning, it may forever impact his wandering ways, his unspoken fears, and his very future with the Shield-Brethren.

Following Sinner and Dreamer, this Foreworld SideQuest reveals the painful truth that sometimes seeing what is to come is far worse than not knowing.

The Beast of Calatrava by Mark Teppo 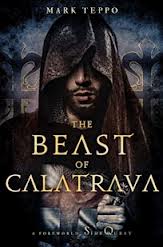 After a battle left Ramiro Ibáñez de Tolosa’s face terribly disfigured, the knight of the Order of Calatrava abandoned his sword for a pastoral existence. But his beastly appearance horrifies all those who cross his path — with the exception of his adoring and pregnant wife. Can he keep Louisa and their unborn child safe from the war that is coming to Iberia? As Ramiro prepares for his child’s birth, Brother Lazare of the Cistercian order searches for a means to inspire men as he travels with the crusading Templars. He seeks swords of legend — named blades carried by heroes of old — believing such symbols have the ability to rally men in a way no king could ever accomplish. But when he learns of the stories told of the mysterious monster that haunts the Iberian battlefields, he wonders what sort of power this new legend might contain — the legend of a man whose scarred face and cold demeanor cannot hide his heroic soul.