London, 1861. Impoverished noble Cara has a simple mission after the strange death of her father - sell off his damned collection of priceless artifacts. Her plan goes awry when aristocratic beauties start dying of broken hearts, an eight inch long brass key hammered through their chests. A killer hunts amongst the nobility, searching for a regal beauty and an ancient Egyptian relic rumored to hold the key to immortality.

Her Majesty's Enforcers are in pursuit of the murderer and they see a connection between the gruesome deaths and Cara. So does she, somewhere in London her father hid Nefertiti's Heart, a fist sized diamond with strange mechanical workings. Adding further complication to her life, notorious crime lord, Viscount Nathaniel Lyons is relentless in his desire to lay his hands on Cara and the priceless artifact. If only she could figure out his motive.

Self-preservation fuels Cara's search for the gem. In a society where everyone wears a mask to hide their true intent, she needs to figure out who to trust, before she makes a fatal mistake.

In a world where Apollo 8 veered tragically off course, the event sent the astronauts, and the space program, hurtling into space, lost and helpless. The tragedy so affected eight-year-old Richard Johansenn that he dedicates his life—and the fortune he amasses along the way—to recovering the capsule. But Richard’s quest proves more complicated than a simple recovery mission, causing him to question the meaning of life, the meaning of death and the heroisms in between. 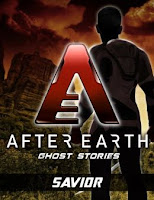 On a distant planet called Nova Prime, the United Ranger Corps defends the galaxy’s remaining humans from an alien race known as the Skrel and their genetically engineered predators, the Ursa—and one Ranger will learn just how high the cost of victory can be. “Ghost Stories: Savior” is the fifth of six eBook short stories that lead up to the events of After Earth, the epic science fiction adventure film directed by M. Night Shyamalan and starring Jaden Smith and Will Smith.

Ranger Jon Blackburn wakes up from voluntary brain surgery, dazed and confused. He is a hero . . . or at least he will be one, if the delicate operation to remove his sense of fear was successful. Blackburn consented to take part in the experimental initiative to increase the Rangers’ reserve of “Ghosts,” soldiers whose lack of fear renders them invisible to the deadly Ursa. All indications are that it’s a spectacular success—but Blackburn doesn’t feel special; he doesn’t feel honored when Cypher Raige, the Original Ghost, personally thanks him. In fact, he doesn’t really feel much of anything. Doctors say that his fear is gone, but something else is missing, too; something Blackburn may not be able to get back, unless he can piece together this twisted jigsaw puzzle and find a way to become whole again.

An original comic book mini-series by Arvid Nelson, Rex Mundi is a murder mystery set in a 1930s Paris where magic is real and kings and popes are still in power. Dr. Julien Sauniere's quest to catch his friend's murderer has led him to a secret society dedicated to protecting the mystery of the Holy Grail. Now in pursuit of the Grail, Julien has been betrayed by his lover, hunted by the Inquisition, and witnesses slaughters and miracles in a wild mountain valley owned by the power-mad Duke of Lorraine.