So I am moving "New Releases" back to its own post. You will see the list of the newest alternate histories stories tomorrow in its own post once again. I felt like the titles were not getting enough attention being shoved in with all of the news stories. As always, feedback is appreciated.

Welcome to our newest reader from Aruba. As I look out over the frozen pond near my house I have the urge to pack up and leave for your home. As it is, I am stuck in frozen Chicago. O well, hopefully I can warm myself up by reading some of the great content I have coming up this week along with my last alternate history post at Amazing Stories (well for the time being at least). Next month I am going to be writing on SF detectives. I hope you all enjoy it as I need a change of pace in my reading. 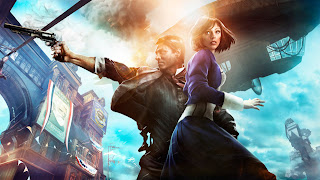 In my quest to bring more video game content to this blog, here is some important announcements for Bioshock Infinite. This is the third game in the Bioshock series. It is set in 1912 during the era of American Exceptionalism. The game's protagonist, former Pinkerton agent Booker DeWitt, is sent to the floating air-city of Columbia to find a young woman, Elizabeth, who has been held captive there for the last twelve years. Though Booker rescues Elizabeth, the two are pursued by the city's warring factions; the nativist and elite Founders that strive to keep the city for pure Americans, and the Vox Populi, a rebel grouping representing the common people. Booker finds Elizabeth to be central to this conflict, and that she also holds strange powers to manipulate rifts in the time-space continuum that ravage Columbia.

Now I know I said I would provide more content on games, but let's face facts: this is literary blog. So for people who like books and games you can check out BioShock Infinite: Mind in Revolt the prequel ebook coming on February 12th. This 30-page e-book provides a back story to the flying city of Columbia and a better understanding of the fued between the Founders and Vox Populi. However, don't completely overlook the game just because it is not a book. A lot went into writing the game including the revamped morality system. Check out the interview with Drew Holmes and find out how Bioshock Infinite was written.

The Tyranny of King Washington Releases on Feb 19th 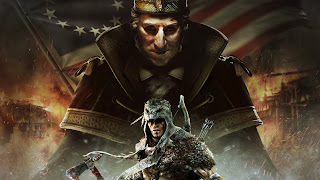 The official release date for Assassins Creed 3 alternate history DLC, The Tyranny of King Washington, has been announced. On Feb 19, 2013, players can download episode 1, titled "The Infamy". The main character Connor will find himself in an alternate universe where George Washington became a tyrannical monarch of the young United States. Although I can only guess what the plot will be for the next two episodes, I assume it will involve you as the player working to overthrow the evil dictator and reestablish the republic.

Last week I talked about steampunk legend James P. Blaylock is returning to the universe of Langdon St. Ives for the first time in 20 years. Well I got some more info about the book and the author. Falcata Times wrote a review of the novel saying "the twists will more than satisfy and if you love Steampunk its going to more than hit the spot, but when you get a writing style that is hard to follow until you get used to the way the authors prose comes across, it’s going to be a story that is going to take some time to get behind."

Not exactly a five star review. The Times almost seem to be suggesting this book should not be the first steampunk work you dip into. Still hardcore steampunk fans should enjoy the novel. If you want more information about Ives, Blaylock and his writing you can read the interviews he did at Fantasy Matters and My Bookish Ways.

Some more news from the leader in grand-strategy games. Paradox Interactive and Paradox Development Studio have announced that Crusader Kings II is now available for Linux. It is the first ever game from Paradox to be launched on the platform and they plan to bring other titles to Linux in the future. Crusader Kings II for Linux is currently available on Steam. Check out the trailer below:
Meanwhile, Paradox has released a new update to War of the Roses which adds new armor and weapons to the game, designed in the style of Scottish mercenaries from the middle ages. The “Gallowglass Mercenary Pack” can be downloaded as a free content update.

Covered in mail and ready to cut down Englishmen for cold hard coin, the Scottish Gallowglass mercenaries brought brute force and fighting spirit to the battlefields like none could. Now is your chance to become one of them, with the Gallowglass mercenary gear pack, which includes the Gallowglass mail armor and helmet. Two new axes are also available to wield, along with the deadly Halflang Sword, ready and able to slay any Englishman in its path.

The Gallowglass Mercenary Pack joins several other free additions that Paradox has released for War of the Roses since its debut in October 2012. Over the cruel winter months, players have gained access to new snow-covered maps, experienced the unforgiving “Pitched Battle” mode, and steadily gained more weapons, armor, and customization options. These additions and more are showcased in a new trailer for War of the Roses:

Two new publications have come to my attention last week, each with multiple upcoming anthologies. First we have Gray Haven Comics which is looking for new artists and writers. As I said they have multiple projects but alternate historians should be interested in the Alternate History and Steampunk volumes.

Next we have Metahuman Press which has numerous anthologies ranging from alien encounters to pulp heroes. Seriously if you can't find something you are looking for with those two presses you are not trying hard enough.

Need some advice? Tor has a list of writing tips from their top authors including Cherie Priest (who was recently interviewed at Tor as well).

3 Things Kim Harrison's Looking Forward to in 2013 by Jeremy Cesarec at Barnes & Noble.

The Alternate Histories of the Norman Conquest, Part 1  and Part 2 by Rosanne E. Lortz at English Historical Fiction Authors.

Counterfactual History: Asking Your Students to Consider "What If?" at Brian Rock at HubPages.

Jules Verne, From The Earth To The Moon, and Space Opera by J Jay Jones at Amazing Stories.

My hero: George Orwell by Margaret Atwood at The Guardian.

Steampunk Hits the Mainstream! (Again) by Ay-leen the Peacemaker at Tor.

Steampunk Is More Accurately Vernian, Not Victorian! by Veronique Chevalier at Steampunk R&D.

Time Travel Defined: A device for repairing a poorly thought out plot. Usually. by Michael Webb at Amazing Stories.

Life After Life by Kate Atkinson at Publishers Weekly.

The Ratchet Retrocast Episode 1 – Our First Leap into a Wretched Hive of Scum & Villainy at Earth Station One.