Made some big changes to the renamed Submissions page. I'm hoping to encourage more fiction and non-fiction submissions for the blog. Who knows? Maybe one day I will even start paying for submissions...

So I took down the poll for the March contest because it looked like "steampunk" was going to win. So the tentative theme for March is steampunk. I say tentative because I am not sure whether I am going to keep doing these monthly themes because the number of submissions for No Americans and Balkanize Me have been disappointing. Perhaps I am not promoting these things well enough. I guess we will see how next month goes before I make a decision.

Need to do some self-promotion here. I hope you guys have checked out the now live Amazing Stories. My new articles on Balkanized North America is now up for your enjoyment. Also congrats to contributor Tyler Bugg (author of Industria, Tecnologia, Potenza) whose short story "From Enigma to Paradox" appeared in the anthology Substitution Cipher, which came in #11 in the Preditors & Editors Poll.

It has been a while since I welcomed readers from a new country. Today I get to say hi to our first fan from Congo [DRC]. Welcome!

Interested in reading about a Nazi fighting monkey? Of course you are. Check out the description for Ack-Ack Macaque by Gareth L. Powell:


In 1944, as waves of German ninjas parachute into Kent, Britain’s best hopes for victory lie with a Spitfire pilot codenamed ‘Ack-Ack Macaque.’ The trouble is, Ack-Ack Macaque is a cynical, one-eyed, cigar-chomping monkey, and he’s starting to doubt everything, including his own existence.

A century later, in a world where France and Great Britain merged in the late 1950s and nuclear-powered Zeppelins circle the globe, ex-journalist Victoria Valois finds herself drawn into a deadly game of cat and mouse with the man who butchered her husband and stole her electronic soul. Meanwhile, in Paris, after taking part in an illegal break-in at a research laboratory, the heir to the British throne goes on the run. And all the while, the doomsday clock ticks towards Armageddon.

Eric Brown at The Guardian called it "an explosive narrative with brilliant cliffhangers and brings the lot to a satisfying conclusion" and Jim Higgins of Journal Sentinel called it "an over-the-top, verbally caffeinated adventure story with smart, nasty ideas and plenty of pulp." What more can you want?

How about the return of a steampunk legend? James Blaylock returned to his Langdon St. Ives series with his new novel The Aylesford Skull:


It is the summer of 1883 and Professor Langdon St. Ives - brilliant but eccentric scientist and explorer - is at home in Aylesford with his family. However, a few miles to the north a steam launch has been taken by pirates above Egypt Bay; the crew murdered and pitched overboard. In Aylesford itself a grave is opened and possibly robbed of the skull. The suspected grave robber, the infamous Dr. Ignacio Narbondo, is an old nemesis of Langdon St. Ives.

When Dr. Narbondo returns to kidnap his four-year-old son Eddie and then vanishes into the night, St. Ives and his factotum Hasbro race to London in pursuit...

This is Blaylock's first new steampunk novel in over 20 years and people are excited. You can read the prologue over at io9, learn about some of the novels that inspired Blaylock at Blastr and learn about his opinion of the steampunk movement in general.

Falcata Times did some coverage last week on the young adult, parallel universe adventure story Planesrunner by Ian MacDonald. Here is a brief description of the novel:

When Everett Singh's scientist father is kidnapped from the streets of London, he leaves young Everett a mysterious app on his computer. Suddenly, this teenager has become the owner of the most valuable object in the multiverse the—Infundibulum— the map of all the parallel earths, and there are dark forces in the Ten Known Worlds who will stop at nothing to get it. They've got power, authority, and the might of ten planets—some of them more technologically advanced than our Earth—at their fingertips. He's got wits, intelligence, and a knack for Indian cooking.

To keep the Infundibulum safe, Everett must trick his way through the Heisenberg Gate his dad helped build and go on the run in a parallel Earth. But to rescue his Dad from Charlotte Villiers and the sinister Order, this Planesrunner's going to need friends. Friends like Captain Anastasia Sixsmyth, her adopted daughter Sen, and the crew of the airship Everness.

Can they rescue Everett's father and get the Infundibulum to safety? The game is afoot!

Their review said "young readers will find hard to put down" and the novel has "top notch dialogue." It must have been a nice compliment because the author himself wrote a guest post where he discusses why he likes creating alternate worlds over alternate histories.

Crusader Kings II: The Republic introduces the great merchant Republics of medieval Europe as playable entities for the first time. A fresh, new experience from playing as a feudal region in Crusader Kings II, players adopt the role as the head, or Patrician, of one of the great merchant families of medieval Europe: Venice, Genoa, Pisa, Gotland and the Hansa. Build trade posts and expand your mercantile empire by controlling the sea-lanes and coasts of Europe... and defend it against rival Patricians, Republics and greedy feudal lords.

Check out the launch trailer:
Crusader Kings II: The Republic is out now from all major digital download portals for $9.99. Patch 1.09 for Crusader Kings II has also been released today.

Next, armies are on the move in new March of the Eagles video developer diary. March of the Eagles is a strategy wargame set in the turbulent Napoleonic Wars. You can lead any of the dozens of European powers in a quest to establish yourself as the most dominant power on land and sea. Take control of any one nation of Europe in this geopolitical barfight, dispatch armies and envoys, raid supply lines, form coalitions and get with the times, already.

Published on the official forums, these developer diaries gave details on the major nations, the art of Napoleonic combat, the subtle game of diplomacy and how to master the seas among other topics. Read all the March of the Eagles developer diaries here.

Now the development team has released their first video developer diary. This three minute video shows the map changing through seasons and other on screen action as Designer Chris King walks you through the finer points of the supply system in March of the Eagles. Learn how this two tiered model of feeding and arming your troops can lead to difficult decisions about what to build and where to expand.

With its early 2013 release soon upon us, it is time to learn all you can about the field of battle and how to keep your armies from wasting away on the Russian steppe. 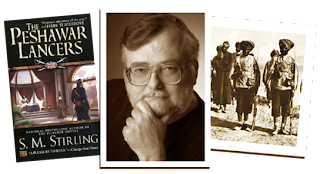 I know not all alternate historians like steampunk, but here is something that should make everyone happy. The guest of honor for Steamcon V (Oct 25-27, Bellevue, WA) is none other then S.M. Stirling! He is the author of one of my favorite alternate history books The Peshawar Lancers, which does not get enough credit as a steampunk work...until now.

Meanwhile, Tor has come up with a good list of steampunk conventions in case you are interested in learning what the big deal is with this whole literary/aethstetic movement. Apparently IBM thinks its a big deal (more tomorrow on that story).

Interested in a little magic? Kim Harrison will be doing a book tour for her new novel Ever After, the 11th book in the Hollows series. You can find the full details from Harper Voyager. 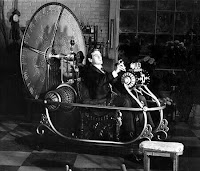 Two new announcements for the past-oriented writer. First, the award winning dynamic duo, Ann & Jeff VanderMeer, have put out a call for stories for the Time Traveler’s Almanac a time travel anthology. Deadline is Feb 28 and the word count max is 10,000.

Then we have something fun for the people who like the pillage and plunder on the high seas. Kerlak Publishing is looking for pirate stories between 2k and 9k words. Deadline is June 15.

Need some advice? Well since any period drama needs good language you should check out How to make sure the language in your historical fantasy novel is period-accurate by Lauren Davis at io9. Also are you have trouble selling your manuscript? Well maybe you are ready for self-publishing. Make sure, however, you first read Five Signs You Should Self Publish by James Palmer at Amazing Stories.

The Nanking War by Ryan McCall
The Nanking War is a work of alternate history, a scenario that would lead to the Japanese atrocities at Nanking being even more exposed to the world at large and leading to a war by the western powers to aid China against Japan.

Barbarossa Reloaded by A non
An alternative military history of the war on the Eastern Front in Russia in World War Two.

Rink Rash by James Desborough
After the a-bombs dropped at the end of WWII the world was shattered. A rock-and-roll post-apocalypse emerges from the glowing ashes and with it a new sport, a violent version of roller derby.

Something In The Blood by M, J. Kukla
It’s Halloween night 1943 and Hollywood’s original vampire Bela Lugosi is alone and broke and involved in yet another badly written vampire movie. Lugosi longs for his days of glory as a star of Broadway and film and decides the only way back is to find his old friend and "Dracula" director Tod Browning, a Wes Craven-style film director, who disappeared mysteriously from Hollywood in 1939.

Dawn Crescent by David Dvorkin
In 1991, at the beginning of Desert Storm, the defeat of American forces at the battle of Khafji is the signal for a broad and bloodily successful anti-Western uprising. In this alternate history, America faces endless war in the Middle East, a resurgent Soviet Union, and growing tyranny at home.

6 Ridiculous Myths About the Middle Ages Everyone Believes by Steve Kolenberg at Cracked.

An alternate history of Super Bowl matchups by Daniel Krook.

Do you like alternate history stories? by videomonkey at Seriously, I'd pay good money to read this.

How to Not Be Steampunk by Austin Sirkin at Steampunk R&D.

On This Spot, In 1753, Nothing Happened. Or Alternatively, It Did at Gentlemen and Tarpaulins.

Ryan Gosling Was Nearly A Member Of The Backstreet Boys by Josh Kurp at Uproxx.

The Alchemist of Souls by Anne Lyle at The Ranting Dragon.

The Iron Wyrm Affair by Lillith Saintcrow at Literary Escapism.

Osama by Lavie Tidhar at The Guardian.

A Perfect Blood by Kim Harrison at SF Signal.

The Rise of Ransom City by Felix Gilman at Steampunk Scholar.

Frederick the Great: A Collective of Unconscionables by The Gentleman Scholars at Kickstarter.

Christopher Nolan’s Interstellar: 10 Things You Need To Know by T.J. Barnard at What Culture!

A Stylish and Whimsical Steampunk Short about the Wheel that Runs the World by Lauren Davis at io9.

6 Things to Know About Revolution's Return by Natalie Abrams at TV Guide.