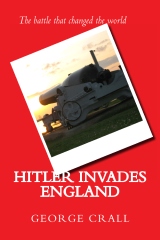 Operation Sea Lion has plagued alternate historians since its inception.  It has been the fodder of many alternate timelines...most of them implausible.  I do not have to remind you that "alien space bats" was first coined during a debate about an Operation Sea Lion timeline.  It seems almost impossible to have Germany successfully invade England, but many still try even today.

Hitler Invades England by George Crall, however, presents one of the more plausible scenarios I have ever read involving a German invasion of England. Crall does not diverge his TL in 1940 and try to follow Sea Lion to the letter as many have mistakenly tried before him.  Instead the timeline begins to diverge years earlier in 1938 when Claus von Stauffenberg manages to convince Hitler refocusing his strategy on defeating Britain as soon as possible.  According to Stauffenberg, Britain is to key to the Reich's victory and once he convinces Hitler of this fact Europe's future begins to grow dim.

As his plans takes shape, Germany develops the industrial and technological capacity to invade England and keeps the British unaware by following a foreign policy that makes the Germans seem less antagonistic (the war actually does not start until 1940).  The book covers the initial planning, to the start of the war, to the invasion of England and the early advancement into the interior.  It ends with a series of OTL bios of the historical actors in his book along with further speculation on history.  I would have liked to learn more about the later campaign and what would have happened after England eventually surrendered, but that story was not available.

The book contains a lot of historical data on the people and weapon systems used in the war.  If this was a textbook AH, like When Angels Wept, I probably could have given it a better review.  Crall, however, attempted to tell the story using a large cast of characters both historic and fictional, but with the large amount of info contained with the book, the transition to the narrative form hurt the story in the long run and distracted me from the scenario Crall was crafting.

The dialogue was rather weak (I lost count of the number of times I read someone say "as you know" to someone else) and the characters were not believable.  The Germans sounded more like 21st century Americans and the British characters acted more like stereotypes than people from that period.  Though it is possible to find a balance between info dumps and characterization (see Then Everything Changed), Crall was unsuccessful in this attempt.

Crall has managed to make Operation Sea Lion more plausible, but how he presented his ideas prevents from giving this novel a better review.  With more work on his writing Crall may be an excellent alternate military historian and I hope to see more of his scenarios in the future.
Posted by Mitro at 11:00 AM