from Digital Journal. Crossposted over at The War Blog. 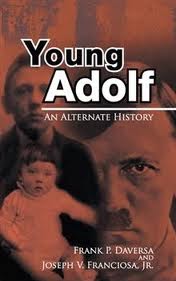 Frank Daversa, author and writer, recently published his new book “Young Adolf: An Alternate History” with AuthorHouse. It revisits Hitler's childhood as an exercise in developmental psychology: can an early romance overcome the domestic challenges of young Adolf's life? The story, written by Frank and Joseph Franciosa Jr., starts with Hitler’s birth, and proceeds through his adolescence. It depicts his childhood in striking detail. You will observe his ordeals, from the rigors of his schooling to beatings by his father Alois. Factual accounts are interspersed with fictional inventions, such as his relationship with a hypothetical girl named Helga. Can young Adolf conquer the personal barriers his difficult childhood presented and become close with her emotionally? How will that change him?
Learn more about Adolf the boy. Experience the molding of his dreams, his prejudices, and his desires in visceral detail. Come to understand the inner-workings of history's most infamous megalomaniac through the perspective of a child’s eyes. Follow Adolf during his younger years. Know the boy before he was the world's most feared man. Witness his courtship with good-natured Helga. Decide whether her influence might have altered the course of history.

Frank is based in Houston, TX. It all began there back in early 2008, when he was thinking of how Adolf Hitler must have had a difficult childhood for him to turn out the way he did. He had no girlfriends during that time to speak of. Then it occurred to Frank, what would happen if someone intervened, someone to show young Hitler true love? Would this be enough to change him for the better as an adult? That is how “Young Adolf” was born.
This does seem like an interesting premise, though I'm rather doubtful as to its overall plausibility. By that I don't mean the possibility of Hitler getting a girlfriend, but of it having an overall impact on his personality and politics. But then I'm rather sceptical of the whole psycho-analysis as an approach anyway since in the end it always seems to boil down to some issue about one's mother and/or sex. Contrary to that I think that even people who one would identify as "good" and even "kind", who had a good childhood and experienced stable relationships, can through deliberations and the setting of priorities come up with ideas and concepts we would rightfully abhor.

Having said that, I may well be doing the whole project premature injustice (...can injustice be mature?^^). It certainly addresses an aspect few if any other writers have tackled in that way. That alone makes me anticipate reading it!

Mitro, the founder of the Alternate History Weekly Update, contacted the author of the above mentioned novel and secured a review copy for yours truly! Thanks, Frank and Mitro!


* * *
War Blogger is the Internet handle of Sebastian P. Breit, author of the alternate history novel Wolf Hunt. You can find news, reviews, and commentary on all matters regarding WW2 on his blog, The War Blog, and follow his writing progress on his personal website.
Posted by Anonymous at 11:00 AM