Big news this week is that Sebastian Breit, a.k.a. War Blogger, is now a contributor to Alternate History Weekly Update.  He is going to be crossposting book reviews from his site on Thursdays.  I hope you enjoyed his review of The Afrika Reich and as you wait for the next one you can check out Breit's novel Wolf Hunt.  I also got my first readers from Austria and Iceland.  Welcome!

We have a lot of good stuff coming this week.  Later tonight I will be posting the winner of the 1983: Doomsday Oral History contest winner.  Korsgaard and I will also be spotlighting some defunct alternate history forums and the legacy they left to the alternate history community as a whole.  Plus I hope to publish an interview with author Guy Saville on Friday.  Enjoy!

Perhaps it is ironic that shortly after the very German War Blogger begins contributing to Alternate History Weekly Update, we see this call for papers on counterfactual/alternate history in German literature.

If you want to enter you have to send a 250-300 word abstract to Kathleen Singles, but you have to be quick since the deadline is September 30.  Anyone interested in entering should check out Uchronia's list of German language alternate history for some references.

What has S. M. Stirling been up to lately? 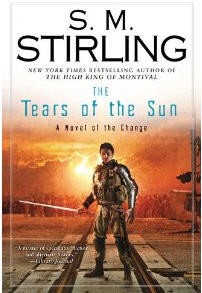 Do I talk about S. M. Stirling to much?  Well he is one of my favorite author and since I am the editor of Alternate History Weekly Update, you will all just have to suck it up and deal with it.

Things have been good for Stirling lately, perhaps because his latest Emberverse novel The Tears of the Sun was recently released.  The novel has sold well, reaching #12 at New York Times, #13 at Publishers Weekly.  Reviews of the novel have been good, if not great.  You can see my review of the novel and check out The Guilded Earlobe which gave the audio version of the novel a grade of B.  As far as I know Stirling has not responded to either of these two reviews, though he does have a reputation of responding harsh reviews.

Stirling has been out and about promoting his new novel at a book signing in Oregon and at DragonCon in Atlanta.  Thanks to Clinton Davis (he provided audio files from the Q and A in Oregon which I will share with you as soon as I find a cheap way of doing it) and Matthew Quinn, we have been able to get some information regarding these appearances.  Here are the important points:

Of course that was just the information about the Emberverse, here are some non-Emberverse news:
If you want more Stirling, you can check out this article where he discusses the Change and the craft of writing at the blog Whatever.

Review of The Big Switch by Harry Turtledove done by AJ.

Review of Witz by Joshua Cohen done by Geoffrey Edelstein.

Review of Resistance 3 at the Boston Herald.


*  *  *
Mitro is founder, editor and contributor of Alternate History Weekly Update.  When he is not busy writing about his passion for alternate history, he spends his time working as a licensed attorney in the state of Illinois and dreams of being a published author himself one day.﻿
Posted by Mitro at 11:00 AM