As many of you know, Bruce Munro is one of my favorite alternate cartographers and I especially enjoyed his recent contribution to the art form: 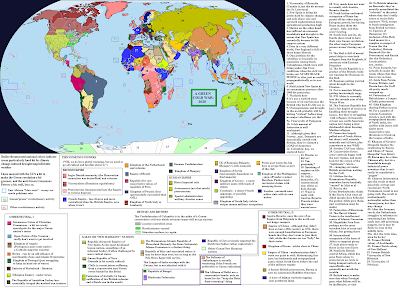 This is "A Green Cold War (2020)" and it is a commission for Venusian Si. Per the description, the Spanish do a better job settling their territory north of the Rio Grande and thus are able to hold on to more of it in the later centuries. This leads to the creation of the nation known as New Spain which has a history similar to our timeline's Brazil where a Royal Exile takes place, before eventually becoming a republic.

Butterflies ensure and the world is very reactionary/conservative. Much of the world is also industrialized and with the undemocratic oligarchies caring little for the environment, the issues of global warming are much more severe. This has led to a radicalized green movement which has spread throughout much of what we would consider the Third World. Opposing it is the "Consensus Powers" which don't always get along but are united in their dislike of the Greens.

As maps go, "A Green Cold War (2020)" is minimalist and dominated by its annotations, but that is par for the course with Bruce. What I like about this map, however, is how the scenario its represents may actually be a future we have to look forward to. If global warming gets worse and the world nations continue to drag their feet, would a militant green movement take matters into their own hands and overthrow governments in an effort to speed up changes? I'm not sure how plausible such a scenario is, but it got me thinking and I like that.

Honorable mentions this week go out to Bruce Munro's "G1 Transformers Earth 2007" (description here and here), Arkhangelsk 's "The United States of America In the Year 1868" and Zek Sora's "General Map of the Federation of British Social Republics".