Alternate History Weekly Update has been doing well this last week.  We got a shout at SF Signal and at Bibliophile Stalker.  Plus we have new first time readers from Slovenia, Venezuela, Colombia, Azerbaijan, Montenegro, China and Russia.  You can see the updated map below: 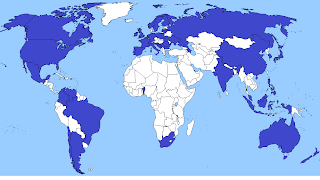 My wife Alana is also reading the blog now, after she realized that she was the only one out of family and friends who has yet to read this.  Thanks for taking your time darling!

We have several interesting posts coming up this week.  Kier will be reporting back from Worldcon, Teramis will be releasing the fourth and final part of her Points of Divergence series and I will be concluding my Back to the Multiverse series.  Plus we will be posting reviews for Outrageous Fortunes: a Novel of Alternate Histories by Steven W. White and Titan: An Alternate History by Michael Tymcyzyszyn and Andy Stanleigh.  May even have another interview coming up as well...

Meanwhile, I am having some issues with Blogger.  It still records the number of people who visit the site and the nations they come from, but it no longer tracks the actual posts they are reading.  Apparently this is an issue across the entire community, so there is nothing I can do about it at the moment.  However, you all may be able to help me out.  If you have anything to say about the content we produce, than please comment or contact us at ahwupdate@gmail.com.  Alternate History Weekly Update is here to serve you.  Tell us what you like and dislike, we want to hear from you.

With the new fall season approaching, there are two alternate history related television shows on the radar.

The first is Alternate History (though the press release calls the show Alternative History) on Spike TV, which will be premiering this Wednesday, August 24th, at 10 pm.  According to the press release:


Alternative History looks at "what if" scenarios from some of history's most pivotal turning points and presents a completely different version based on science and fact. The series will use state of the art animation to present these alternative histories in a hyper-stylized manner.  Each episode will culminate in an exploration of how the world today would look if these changes had occurred. Alternative History is produced by Flight 33 Productions (Emmy(R)-nominated Life After People, The Universe, Battle 360, and Emmy award-winning A Distant Shore: African Americans of D-Day). Jason Sklaver, Louis Tarantino and Douglas Cohen serve as executive producers. 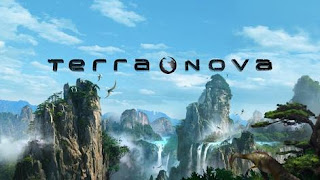 The first episode will be called "What if the Nazis Won WWII?"  I think you all have an idea of what we are likely to see in that episode. [EDIT 8/25/11] - I did a review of the first episode, you can read it here.

Then there is the upcoming Terra Nova, which is scheduled to air on Fox on Monday nights on September 26, 2011, starting with a two-hour premiere.  The show begins in the year 2149, a time when all life on planet Earth is threatened with extinction (possibly due to dwindling worldwide air quality). In an effort to save the human race, scientists develop a "time machine" allowing people to travel 85 million years back in time to prehistoric Earth. The Shannon family (father Jim, his wife Elisabeth, and their three children Josh, Maddy and Zoe) join the tenth pilgrimage of settlers to Terra Nova, the first human colony on the other side of the temporal doorway. However, they are unaware that the colony is in the middle of a group of carnivorous dinosaurs.

What is interesting about this show is that they are not technically time travelling.  The colonists do not accidentally wipe out the future (and themselves) by stepping on a dragon fly.  Instead the changes in the past create a brand new timeline that does not conflict with the original timeline, thus avoiding a paradox.  It is a very similar concept to what my Back to the Multiverse series is discussing.

Will these shows be any good?  The odds are against them.  As Steven H Silver said in his recent interview: the general population tends to be historically illiterate.  This will hurt Alternate History the most since they may sacrifice plausibility in an effort to appeal to a larger, and less educated, audience.  Terra Nova, however, may have a chance since it is set so far in the past, but some dinosaur fans may become upset if they begin using species that do not belong in the time period.  I guess we will all just have to wait and see.

Alternate history is a useful tool when you want to make some social commentary.  Last August 16, The Submission by Amy Waldman was published.  A curious peice of alternate history, the point of divergence is set in January 2004.  The panel that approved the 9/11 Memorial chooses another submission instead...one made by a Muslim-American.  The book covers the resulting controversy following the panel's decision, which mirrors the controversy over the Vietnam Veterans Memorial and the Park51 Muslim community center.  I may just read and review this book, but in the meantime you can catch reviews of The Submission both here and here.

A Concert for Transylvania

Kim Newman has released on Facebook a partial draft of his new short story "A Concert for Transylvania, Anno Dracula 1990".  The story is set in the Anno Dracula series and is expected to be published in the fix-up novel Johnny Alucard sometime in 2012 or 2013.

Fans of S. M. Stirling may get a chance to meet the famous alternate history author at MarsCon 2012, where he will be the Writer Guest of Honor.  Stirling is known for his alternate history series which include the  Draka series, the Nantucket/ISOT series and (one of my favorites) the Emberverse series.  MarsCon is located at Williamsburg, Virginia and will last from January 13th to th 16th.

Farther in the future we will have the Alabama Phoenix Festival in Birmingham, Alabama on May 25-27, 2012.  They will have an Alternate History track, so anyone from that area should go check it out.

Review of Ring of Fire III by Eric Flint at That's interesting...

"The Futures of Civilization" by Brian Stewart at National Review Online, discussing Niall Ferguson's theory in his new book Civilization: The West and the Rest.

Review of the Weapons of Choice series by John Birmingham at Matchsticks for my Eyes.

Review of The Sky People by S. M. Stirling at Scienceray

Review of Island in the Sea of Time by S. M. Stirling at Blogging for a Good Book

Review of Starclimber by Kenneth Oppel at figment.

Review of The Guns of the South by Harry Turtledove at Technomancy.

Director-writer Mike Cahill talks about Another Earth at The Republic (Columbus, Indiana).

The Bonaparte Legacy an alternate history mod for the game Darkest Hour.

Harry Turtledove's baseball works at Cooperstown Chatter, by Freddy Berowski.
Posted by Mitro at 11:00 AM