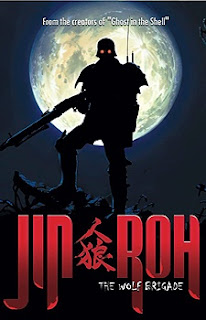 I can think of any way to open this review so let's get right to it. Today we'll be taking a look at the anime movie Jin-Roh: The Wolf Brigade. It takes place in a world where Germany won the Battle of Stalingrad and conquered the Soviet Union. After that it wasn't long before all of Europe was under Germany's control. With Europe secured Germany began to turn its attention towards its former ally Japan. Despite a valiant effort Japan ultimately surrendered after Germany used atomic bombs. Shortly thereafter Japan was formally occupied by Germany.

Jin-Roh takes places during the 1960s. The Germans are beginning to pull out and Japan is finally getting some room to breathe. The Japanese government has instigated several rapid industrialization programs in order to boost their economy. Unfortunately, there's also quite a bit of social unrest as a result of these programs. Riots frequently breakout, socialist movements are getting worryingly popular and anti-government terrorists seem to get more numerous by the day. To restore law and order a special paramilitary police force known as the Kerberos Panzer Cops has been established.

The movie follows a member of the Panzer Cops named Kazuki Fuse. He's allways considered himself a loyal member of Kerberos, but he's shaken to his core after witnessing a young girl blow herself up during one of the riots. He finds himself increasingly drawn towards the girl's sister, Kei Amemiya. At the same time there's an ongoing investigation into a possible counterintelligence cell that has infiltrated the Panzer Cops. This cell is known by the name Jin-Roh.

Okay, before we go any further we need to talk about how this movie came to be. Jin-Roh: The Wolf Brigade is based upon the Kerberos Cycle manga by Mamoru Oshii, who also helped with the production of the movie. It's actually the third adaption of the Kerberos Cycle. There are two live-action movies, The Red Spectacles and Stray Dog, which came out before Jin-Roh. Chronologically, however, Jin-Roh comes first since it takes place in the 1960s while the live-action movies take place in the 1990s. Mamoru Oshii has also been involved with several classic anime films such as AKIRA and Ghost in the Shell. Now let's examine the alternate history itself.

Plausibility wise this movie is probably on the softer side. Nazi Germany never had any plans to expand into East Asia or to stab Japan in the back. Then there's the reason Japan fell to Germany: the atomic bomb. For multiple reasons Germany was nowhere near developing atomic bombs in our world, and they wouldn't be any closer in the world of Jin-Roh. On the flip side, the socioeconomic situation in post-occupation Japan is a bit more believable because it echoes the real world. We see several left-wing movements gaining popularity, particularly among the youth, just like in our world's Japan in the 1950s. The rapid industrialization and urbanization, along with all of the resulting problems, parallels South Korea during the 1960s and 1970s.

Now let's talk about the art style. Nine times out of ten if you watch an anime it's probably going to employ the standard anime art style. The technically term for this is Mukokuseki, which roughly translates as statelessness. This often employed to add visual diversity to a cast characters and make them easier to differentiate. Jin-Roh falls into the remaining one tenth that forgo Mukokuseki in favor of a more realistic art style. Personally, I tend to favor the typical anime look, but Jin-Roh's art style does make for an interesting change of pace.

This movie has really great atmosphere to it. It has a very gritty and cynical feel to it, and there's shades of grey all around. The terrorist may have legitimate grievances, but their violent and destructive methods aren't serving anyone. The Panzer Cops are certainly necessary to maintain order and protect the populous, but they have to resort to increasingly harsh measures to do so. At the end of the day nobody really looks that good, and there really aren't any easy answers. This is very much a movie steeped in cynicism, and if you're the kind of person who likes happy endings you might be disappointed.

There's a lot of wolf imagery throughout the movie. For example, the members of the Panzer Cops frequently get compared to wolves and their organization's flag features a wolf. The original version of Little Red Riding Hood also features prominently throughout the movie. If you're not familiar with that version, I won't give the ending away. I will, however, mention that in the original version there was no woodsman. The guns, uniforms and vehicles are all clearly German and very accurately depicted. This does make sense, given that Germany has only recently pulled out of Japan.

Overall I found this movie to be enjoyable, but there were a few minor flaws here and there. I felt like Fuse and Kei's relationship could have been developed just a bit more. The pacing of the movie also felt like it got a bit rushed towards the end. It's not really a flaw, but I do kind of wonder what happened to America in this world. Granted, the movie is focused on Japan, so that wouldn't be plot relevant, but I still wonder about how America fared.

The English language dub is absolutely top-notch, and the whole cast does a great job. The English dub was licensed by Bandai Entertainment, which closed its North American division a few years ago. Fortunately, Discotek Media was rescued the license and re-released Jin-Roh on DVD and Blu-ray.

Well there you have it. Jin-Roh: The Wolf Brigade is a dark and cynical alternate history political thriller. If you enjoy darker anime movies you won't want to miss this one. As a side note, I know you guys enjoy The Audio File, and I assure you that slowly but surely I'm putting together a new edition. Though I may have one more anime movie to share before we get to that just yet.

Well I think that's enough from me for now. I will see you guys next time.