Communist flags and alternate designs for the flag of Japan do come up a lot in Flag Friday...but I am pretty sure this is the first time the flag I am featuring today combines both of those occurences. 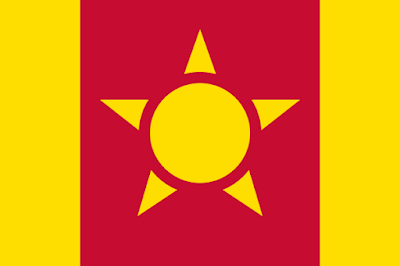 This is the flag of the People's Republic of Japan created by FlyingParafin for AlternateCountries1234567's timeline where Japan is invaded by the Soviet Union. This is actually the first version of the flag as FlyingParafin made other versions of it based on AlternateCountries suggestions, but I liked this one the best. Its simple and not as busy as the later versions.

What is most interesting about this map was FlyingParafin's overall idea for this flag. He said: "I wanted to make a communist flag that wasn't just lazy or uninspired, as most flag makers would have just slapped on a hammer and sickle/some stars and call it a day." That is a good point and its a belief I have seen among other alternate vexillologists. In fact when you do start to compare Communist symbolism, you do start to notice a lot of repeating themes (hammer/sickle, red background, black bars, red/gold star, etc.). Maybe the Soviets and their allies lost the Cold War due to lack of creativity?

What are your thoughts on communist flags?