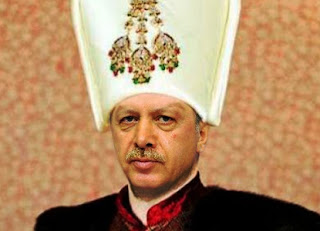 Although I self-banned from AH.com for most of last year to avoid distractions while learning a new career, I dropped in sometimes to look for interesting discussion in the public forums. One I liked was “Sultan Erdogan: Arab Spring Alternate Timeline.”

As has unfortunately occurred, the “Arab Spring” has become an Arab Winter for the most part. Syria is wracked by civil war, with the non-jihadist rebels largely reduced to a sad enclave near De’raa with Assad still ruling from Damascus and ISIS controlling the northeast. Libya has descended into a chaotic mess after the fall of Gadhafi, while in Egypt the military has removed the democratically-elected  Muslim Brotherhood and put in place Mubarak-ism light. Only in Tunisia have things worked out as hoped, although the Saudis at least have made some reforms.

In this timeline, Turkish Prime Minister Recep Tayyip Erdogan decides in the aftermath of a 2012 shoot-down of a Turkish jet by the Syrian government to stop sucking up to a Europe that will never let them in. Instead he decides to plow Assad under, bolstering the democratic and freedom-inclined Syrian rebels just when they’re about to be usurped by jihadists like al-Nusra. With the Turks wrecking Assad’s air force and taking Aleppo, Operation Damascus Volcano succeeds and Assad’s regime crumbles. The writer of the timeline compares this to Operation Iraqi Freedom, in which most of the population keeps their heads down and a poorly-armed and hated regime collapses. It’s not all sunshine and roses, however, as the Kurds aren’t well-disposed to Turkey and there are still jihadis in Syria opposed to a government run by the Syrian National Council. A postwar insurgency still breaks out in Syria (albeit not as severely as the one in Iraq) and the Kurd problem blows up spectacularly later.

In the meantime Erdogan visits Egypt and persuades President Mohammed Morsi to back off pushing Islamism, something that might have saved Morsi and his government. Erdogan even leads a convoy of relief trucks into the Gaza Strip, something that drives the Israelis apoplectic. This has its consequences for Jordan, where Palestinian unrest leads to the partition of the country. Furthermore, Turkey’s growing power has led to Golden Dawn, a neo-fascist party, growing increasingly influential in Greece.

Although some claim a later installment where Turkey annexes part of Syria in defiance of the international community is implausible, Turkey does have a history of this behavior. The Turks invaded Cyprus and set up a puppet state in the northern third of the island when Turkish Cypriots were seen as under threat. Turkey doing the same thing in the name of protecting Turkic populations in Syria would be totally in-character.

You’ll have to read the timeline itself to judge whether this world is a better one than our own. In this timeline, the Syrian people are free of Assad’s cruelty, the savage ISIS organization never existed, and the moderated Morsi government preserved democracy in the most populated Arab state, but the new order in the Middle East largely benefits a Turkey ruled by a president with authoritarian tendencies and (despite the loss of its Syrian ally) the Iranian theocracy. Israel feels increasingly threatened and might attack Iran’s nuclear program, something that President George W. Bush prevented a few years back and could have led to a massive crisis. The world seems better, but we’ll have to see where this is going.


So if you’re interested in reading about a more successful Arab Spring with fewer negative consequences, given Sultan Erdogan a spin…

Matthew W. Quinn is a longtime member of AH.com who posts under the handle MerryPrankster. He’s also a published writer of science fiction, fantasy, and horror whose works can be found on Amazon. For a free fiction sample, check out the historical-horror tale “Nicor” at Heroic Fantasy Quarterly. Those interested in inside information and exclusive content can join his mailing list here.
Posted by Mitro at 3:00 PM