Flag Friday: Royal Standard of Spain under the Hohenzollerns by Ramones1986

My birthday is on the same day as the start of the Franco-Prussian War. It is a historical coincidence that I always found fascinating, even if unimportant in the grand scheme of things. Nevertheless, its probably why I found this flag interesting: 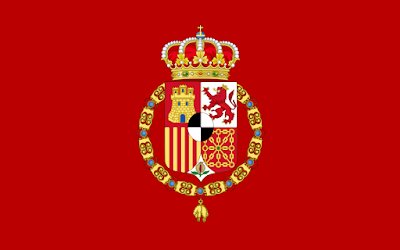 This is the "Royal Standard of Spain under the Hohenzollerns" by Flag Friday alum, Ramones1986. Now for those who don't know, one of the causes of the Franco-Prussian War was Spain offering the Spanish Crown to Leopold, Prince of Hohenzollern. Although Leopold declined the offer in our timeline, it still caused tensions between France and Prussia to increase and eventually led to war being declared. Perhaps in hindsight, Leopold may have accepted the offer knowing that war was inevitable.

There isn't too many changes from the current Royal Standard of Spain, besides the coat of arms of the king in the center being changed to reflect the Hohenzollern colors. Simple changes really, but effective. Still one wonders what a Spain with direct ties to the ruling house of Germany would be like in this alternate timeline...