I believe I have mentioned before that I am big fan of The Great War on YouTube. Its a channel that covers the history of WWI a week at a time, with special episodes thrown in every once and a while on other topics, such as weapons, uniforms and what famous people were doing during the war. If you haven't seen it yet, go check it out. I am personally happy, however,  that I am not the only one in the alternate history community who watches it: 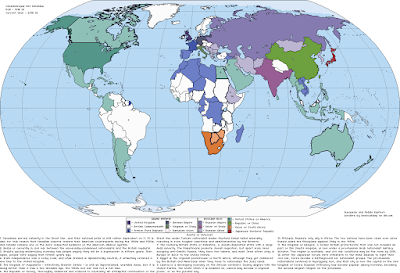 This is "Constantinople Not Istanbul" by veteran Map Monday alternate cartographer, Rvbomally. This map was inspired by Rvbomally watching The Great War and the point of divergence is the Entente succeeding in forcing the Dardanelle Straits in 1915. The war ends a year later with the Kaiser keeping his throne, but both the Ottoman Empire and Austria-Hungary collapse shortly thereafter. By the present day of the timeline the "Grand Entente" (now including Germany and the Danubian Union) are locked in a Cold War with Russia, while an isolationist America and a communist Japan look on.

I always liked alternate WWI timelines and Rvbomally did manage to insert some humor into the map, such as Ireland's "rocky road" to independence. The map itself is well-done, with soft colors and Munroist annotations. Overall, its a good map that took inspiration from a good YouTube channel. I love it when history nerds can help each other out, even if indirectly.

Honorable mention this week goes out to Zalezsky's "The Cossacks Marched Home". You should also check out what maps of Mars would have looked like if they were designed by Medieval cartographers.