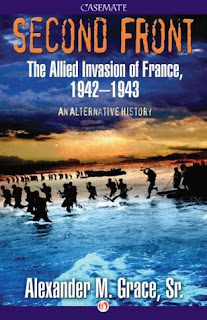 The Allied Invasion of France, 1942-43 by Alexander M. Grace is one of those books I enjoyed and can recommend to lovers of alternate history...but I can't help thinking there is an even better book hiding within its pages.

In this timeline the Allies invade Europe in the Fall of 1942 instead of in the summer of 1944. This is similar to the proposed Operation Roundup and Operation Sledgehammer, except instead of attacking across northern France, the Allied invasion force would land in southern, Vichy-controlled France. Thanks to high-level negotiations with the French government, France reenters the war just as the Allies begin off-loading in Marseilles and other ports along the French Mediterranean coast. The Germans, still thinking that the invasion will happen in the north and distracted by the battle around Stalingrad, are slow to act and when they do finally confront the reality of the invasion, Supreme Commander George Marshall and General George Patton are driving their forces north. Field Commander Erwin Rommel is sent to stop the allied advance, but even his armored first of German tanks may not be enough and as Axis losses mount in both the Western and Eastern theaters, German commanders begin thinking of way to get rid of Hitler and his cronies before it is too late to save Germany.

The Allied Invasion of France, 1942-43 is a well-researched and believable scenario of how the Allies might have invaded Europe earlier and brought the war to a different conclusion. Grace certainly has a strong grasp of military strategy and tactics, plus he didn't just fall into the trap of everything going right for the Allies and allowed for mistakes and accidents to be made. There were little touches as well that brought a smile to my face, such as characters imagining what it would have been like to transport troops and supplies on a beachhead under enemy fire instead of through a friendly port or the "Eisenhower Plan" to provide economic support to a war-torn Europe.

The book wasn't without its flaws and there were two big issues that I had with The Allied Invasion of France, 1942-43. First was how it was written. Most of the story was told by info dumps in a "tell, don't show" fashion. There were characters who occasionally had dialogue, but they were just there to give context to the information Grace was throwing at us. To be honest they weren't even needed and at times detracted from the book since the characters tended to be bland and indistinguishable from each other, although thankfully the dialogue wasn't as bad as the dialogue in Germanica. I'm not sure why Grace just didn't take the guise of a historian from this timeline and just write a fake history book of that era, like For Want of a Nail or When Angels Wept. It would have been a much better book in my humble opinion.

The second issue is the short epilogue at the end and if you don't want anything spoiled, I would skip to the last paragraph. Still here? Okay, lets begin: Grace paints a post-war Europe where Germany is still intact, Poland and the Czech Republic are democratic (and presumably armed by the Allies) and Tito leads a quasi-democratic Yugoslavia that is also pro-West...and Stalin is just fine with this. Grace makes several references to Stalin's paranoia and distrust of the West and yet despite the western allies being a lot closer to the Russian border, relations are surprisingly good between the two sides. Even more surprising is the fact that when China falls to communism, the West just shrugs it off like it was no big deal. This was a major issue in the United States in our timeline, but it does nothing to effect the good feelings all around.

I think what Grace is trying to say is that an earlier Allied invasion of Europe would have convinced Stalin that the Allies weren't just waiting for the Soviets and the Nazis to destroy each other. Thus mollified and with less Russian lives lost, the Soviet Union would be more willing to work with the West. That being said, the incompatibility of the two economic systems, the personalities of the people in charge, the desire to control the resources of the Third World and the arrival of nuclear weapons on the scene (which aren't actually used by the end of book) would have eventually brought upon the Cold War. So Grace's epilogue is just a little too optimistic to me, but I welcome any arguments to the contrary.

Despite my issues with the writing style and the epilogue, I nevertheless can recommend The Allied Invasion of France, 1942-43 by Alexander M. Grace, especially if you are a fan of alternate history. Casual fans of the genre may not enjoy his style of storytelling, but alternate historians will appreciate a detailed WWII scenario that doesn't end in a cliche Axis victory.