Poland can into space? 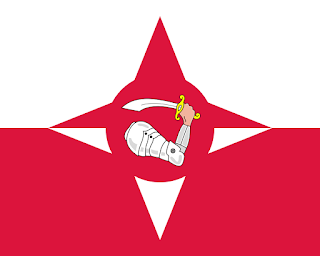 This is the "Space Naval Jack of Poland" created by Reddit user GwiezdnyBaca and first posted in the Vexillology subreddit. According to GwiezdnyBaca, this is based off the Naval Jack of Poland with the cross removed and replaced by a star. A simple change, but one that speaks volume and opens pathways to creativity. Others must have thought as much as I do because it was featured on February 1st by Krystof Huk in the "On this day on Reddit" post for the Flags of the World (FOTW) Facebook group.

There is no alternate history attached to this flag as far as I can tell, but personally I could see this flag being used in a timeline similar to Johnny Pez's "The Drowned Baby Timeline". A large and economically powerful Poland with access to German rocket scientists conducts a manned space program and slaps this on their rockets. Then again, if that point of divergence is too implausible or early, you could do something like this What If Wednesday scenario I almost forgot about. Here Russia never arises out of the Time of Troubles and Poland becomes a world power, eventually reaching the technological level to put someone in space. That way there would be more Polish astronauts besides Mirosław Hermaszewski.

For those wanting more flaggy goodness, check out this post and this post from Ben "False Dmitri" Carnehl featuring new flags of the Affiliated States of Boreoamerica.