I am doing something a little different this Flag Friday. I am going to briefly discuss the flags currently up for the 2016 Turtledove Award for best alternate history flag on AlternateHistory.com. I'll be brief since there is more than one to go through and then you can go vote on the one you think is the best.

"City of Miracles" by Rarayn 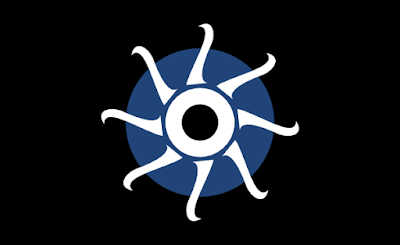 This flag, and the story that goes with it, is more Lovecraftian then alternate history, but I guess even cultists of the Great Old Ones need patriotic symbols. If you ever wanted your nation's banner to stare back at you for forever, the Flag of an underwater Mediterranean city is certainly for you.

"Mugunghwa Flag of an Alternate Korea" by Occam 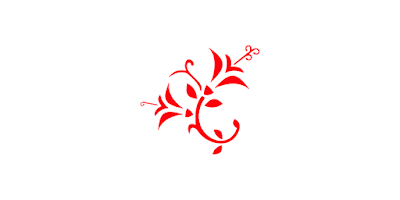 I like seemingly simple looking flags that nevertheless have deep alternate histories. This one is for a Korea where the Yi Dynasty is restored to the throne of Korea. Perhaps if Syngman Rhee had not come to power the House of Yi may have had a shot, but alas, that is for someone with more knowledge of Korean history to determine.

Also the background for this flag is white and it kind of blends into the post background. I recommend clicking on the image to get the full effect.

"Cosmic Hetmanate of the Martian Host" by Krall 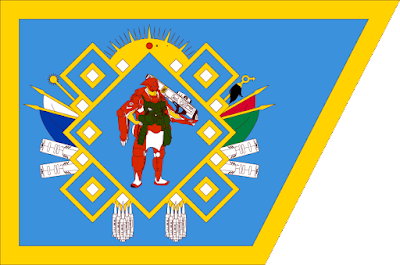 Although set in the future, since this flag was chosen by a former Soviet Martian colony, I have to expect some kind of alternate history at work here. I especially like the soldier in power armor, which reminds me of certain countries that work in swords and guns into their flags.

Which one do you think should win? Let us know in the comments and don't forget: polls close on March 2nd.