Flag Friday: The Flag of Bowie by Ferdeederdeetrerre

So what can an alternate history blogger who is serious about staying on-topic do to remember David Bowie, one of the most creative and influential artists of the 20th century? Hell, I may even be downplaying Bowie's impact with that introduction. In Zachary Lipez of Vice's article on Bowie he had this to say: "without him, there would be no punk, no glam, no post-punk, no hair metal, no goth, no Brit-pop, no new wave, no freak folk, no new romantics, no (as we know it) blue eyed soul, no (as we know it) art-pop."

Did Zachary goo to far or is on to something about Bowie impact on history? Was he really a "great man of history"? Who knows how the world would have been different if Bowie had used his talents for something evil...like politics. Maybe he would have conquered Britain... 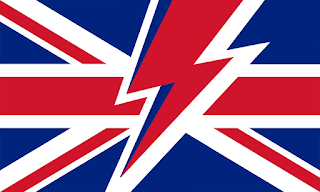 This is "The Flag of Bowie" by Ferdeederdeetrerre, which was posted to Reddit on the day the world learned of Bowie's passing. You can tell that the design takes inspiration from the cover of the Aladdin Sane album. There really isn't a story that goes with the flag, but one person in the comments did say it reminded them of this flag from AlternateHistory.com...which is based on the flag of the British Union of Fascists, hence my politics comment.

Before this goes any further, no I am not saying Bowie is a fascist, but I thought I would be a bad alternate historian if I didn't point out the similarities of the two flags. What I can say is that when I first saw the flag, I could think of no better way to express my remorse for the passing of the man who gave us "Space Oddity" and my favorite take on the Serbian inventor, Nikola Tesla, during his role in The Prestige.

I'm not sure how to end this, but I think Simon Pegg said it best: "If you're sad today, just remember the world is over 4 billion years old and you somehow managed to exist at the same time as David Bowie."