Having an alternate timeline where there are more post-Cold War functioning communist states is nothing new, but I felt Map Monday newbie Kryštof "Aven" Huk managed to do something different with the old concept with his map "Velvet What?!": 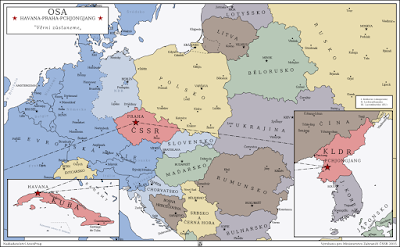 In this world there was no Velvet Revolution and the communists in Czechoslovakia remained in power as the Iron Curtain collapsed. The Slovaks, however, have zero interest being Red anymore and declare independence. By the present day, the Czech Soviet Socialist Republic (CSSR) is a North Korean-esque state (and every timeline needs as many of those that we can fit in) allied with the last two remaining communist nations: Cuba and North Korea. Other changes from history include a European Union that hasn't managed to break into Eastern Europe, a peacefully divided Yugoslavia, an East Germany that is slowly unifying with West Germany and a Kaliningrad Oblast that was divided between Poland and Lithuania.

I enjoyed not only the recent divergence from history, but also the modern style of the map itself. The colors are soft and don't hurt the eye and since this map appears to be from the perspective of the alternate CSSR itself, I like the fact that they are centered in the map and the language of the map is in Czech. I have shared a lot of maps by Aven in the past on social media and I am glad he finally got enough eyeballs on his work to make it onto Map Monday.

Honorable mention this week goes out to "Mad Mac: Hand of Fire" by KapiTod.