As many of you may know, I am a big fan of False Dmitri/Ben Carnehl's Affiliated States of Boreoamerica timeline. Its a lovely bit of world-building with a subtle humor that I also learned recently was in the same universe as Ben's Pseudodemetrian Imperial Commonwealth. That being said, I am here to talk about maps, not the timelines themselves. So lets look at one of the maps from the ASB that caught my attention: 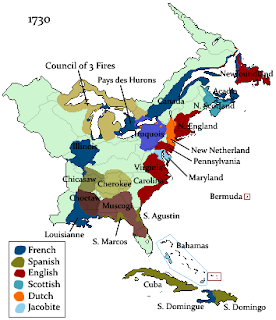 This is the map of the lands of the ASB in 1730. Admittedly its very rough (just look at those color blobs in the bottom left), but it gives an idea of the different political entities that existed in 1730. Here we can see the colonies, independent Jacobite states and some of the more powerful Amerindian tribes. I would actually like to see more maps like this since there is not central depository for the ASB's history. We get glimpses of it from the brief histories Ben and others release on the individual states, but something on the "confederal" level would help string them altogether. Nevertheless, this is a map enjoyed pouring over and I look forward to what Ben and the other contributors to the ASB have in store for the future.