Map Monday: Western Rump (or The Roman World in 771 AD) by Bruce Munro

What I am trying to say is that the "Rome Never Falls" cliche (I should remember this topic for Trope Talk) focuses more on both halves of the Roman Empire staying united and never falling. That being said, what if the Western Roman Empire managed to stick it out alone? You get a scenario and map like the one below by Bruce Munro called "Western Rump (or The Roman World in 771 AD)": 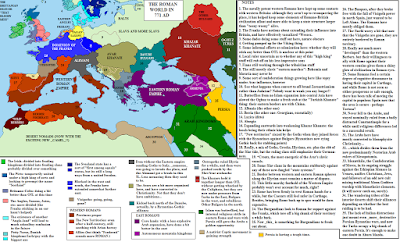 From what I could gather, in this world the Vandal invasion of North Africa failed and thus the Westerns Romans managed to hold off the barbarians long enough to reestablish themselves in Carthage in a bit of historical irony. Today Western Rome's greatest strength is its navy and while they have friendly relations for the time being with the Eastern Romans, no one is interested at the moment in bringing the band back together.

I like this scenario because it keeps the Western Romans around without turning the timeline into another Roman Wank. Rome is a powerful force, but its not the only player in the region. Bruce also didn't ignore the butterflies and I like what he did with the Arabs, Khazars and Roman Britain. As for the map itself, well if you don't like the Munroist style by now there is nothing else I can really say to change your mind.

Honorable mention this week goes out to "The Upper Country" by False Dmitri.