I am a big fan of the works and maps of Ben Carnehl, also know as False Dmitri on AlternateHistory.com. Besides his work on that forum, he has a long history with the online alternate history community and has been an active member of such communities as the AltHistory Wiki and Ill Bethisad. I have featured his work before, such as his map of the Royal Province of Maryland and his balkanized American ethnicity map, which is the #2 most viewed post on The Update. After seeing one of his most recent maps get a lot of Twitter love, I decided to feature it on Map Monday. Its called "The Baltic Region": 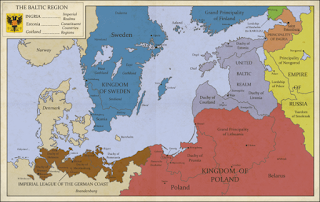 The map is set in Ben's Pseudodemetrian Imperial Commonwealth universe, where Russia, Poland, and Sweden are united under a shared dynasty. This is very similar to his Affiliated States of Boreoamerica universe, where world building is emphasized over plausibility. That is not to say that Ben doesn't put a lot of work into these universes, but the details tend to focus on social and cultural issues rather than politics. They are quite enjoyable worlds to follow, much like his maps.

While I do enjoy maps with a lot of details and annotations, sometimes you get tired of the MSPaint aesthetic and want to see something a little more polished. In this case we see a region of this timeline that must be very important as it is the meeting place of the three major powers that make up the PIC. Its not cluttered and the colors are pleasing to the eyes. I enjoyed it and I am glad others who I shared it with thought the same.

Honorable mention this week goes out to MrGreyOwl's "Republic of Romanistan". If you want to submit a map for the next Map Monday, email me at ahwupdate at gmail dot com with your map attached and a brief description in the body of the email.